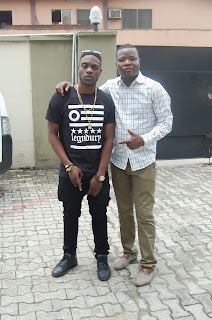 Without doubts, many know the name Taiwo Afolabi like the back of their hands, having made a name for himself in the business world. He is major player in Shipping, Haulage, Clearing and Forwarding and Oil and Gas.Consequently, many are looking forward to seeing any of his offspring toeing the well-beaten path that the family is known for. But it appears he is a very liberal-minded man who will prop his children in any profession of their choice.
Society Happenings gathered that one of his children, Damilola, better known as LAX, is presently making waves in the music circle. The young man, who is signed to Wizkid‘s Starboy Entertainment,  is preparing to go on a music tour of Europe tagged Ginger Tour.
The Europe tour, which is being packaged by StarBoy Record, Denshaw Production and Drew Uyi Media, will take the Hip-hop act to 15 cities, including Madrid, Stockholm, Rotterdam, Oslo, Stuttgart, Paris, Rome, Brussels, Denmark, Vienna, Madrid, Finland, Cyprus, Hamburg and Luxembourg.
The tour will kick-off in Hamburg, Germany on September 19 and ends on October 31, 2015.Society Happenings also gathered that LAX is also pushing his single, ‘Morenike’, produced by Biano Summers and the video directed by Clarence Peters.
at September 02, 2015