A HUMAN FARM DISCOVERED IN LYBIA. 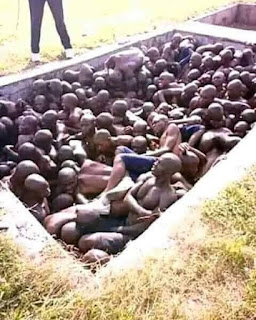 THE TROOPS OF FIELD MARSHAL HAFTAR RELEASED MORE THAN 2,500 AFRICANS (men women and children and babies) in a very strange farm.

All these Africans were locked in small cages limiting their movements like wild beasts. They were all in a very bad state.

Some had no eyes and all bore stigmata of gross surgery.

The story of these unfortunate africans is beyond any understanding.

It's the farm of horrors.
The paroxysm of horror.

The worst was, again, attained.

The most extreme barbarism worthy of hell executed by incarnated demons.

No human being can commit such atrocities to other human beings and feel free.

With the blessing of the European Union, they created the black market of all parts of the human body.

They ruled that the black people were human spare parts.

Without bothering to give them the slightest anesthesia, doctors took from them the organs that the wealthy Western clientele needed.

We sequester human beings. They are denied their humanity and locked up in cages as a reserve for the needs of Western medicine.

An abominable booming business in the Middle East.

The black people are the target of the worst predators of humanity according to a machiavellian agenda.

The Arabs are and have always been in history, the executor of the dirty work of the West.

They despise us but want our organs and our dear melanin, the heavenly mantle of the universe.

Our enemy is not our opposite. Our enemy today is the same as yesterday. Those who erased the Khemet civilization (Ancient Egypt).

History is repeating itself because we have learned nothing from the past. We extended the other cheek to our grave diggers. They are accelerating their strategy to erase us from the planet.

No to the exile of Africans. No to emigration.

Today, the worm has penetrated the fruit and devours it from within. Our enemy smiles at us but stabs us in the back. He is the leprosy and the cancer of humanity.

Faced with the silence of the Western press and the African leaders, following  the dismantling of this dubious network, please inform the whole family in Africa. Go to the radios and make posters to tell young people not to go to Arab countries. This is the journey of death.

For these people, Blacks are insects. A lower race that must be eradicated.