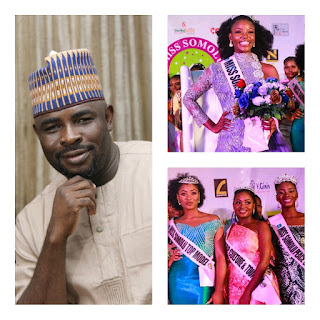 *_...gives scholarship to Aisha Buari and others_*
*_...makes case for community involvement and educational support_*

The Executive Chairman of Somolu Local Government, Hon. Abdul Hamed Salawu, has charged youths within the Somolu communities to get involved in community activities and to hold their education in high esteem.

The Council Mayor, through his representative stated this on Sunday night at the grand finale of Miss Somolu Beauty Pageant which paraded 21 beauty queens representing the major streets of Somolu. Streets represented by the contestants included Okesuna, Adebiyi, Fola Agoro, Apata, Oyebajo, Oguntolu, Anifowoshe, Sholanke amongst others.

The soft speaking Council Boss, Dullar, through his address to the audience at the V.Ginis Hall, stated that Somolites are known to be a set of people with inner and outer beauty amongst which included character as well as intelligence. He said the Local Government would be sponsoring the best three beauty queens who are presently studying at their various higher institutions.

In his opening remarks, the Executive Chairman who was represented by Hon. Kehinde Ladega, said he's sure that the next Miss Nigeria will be emerging from Somolu. "Unlike the conventional pageant, Miss Somolu contest would open a four years scholarship for some of the contestants who also has some other talents which would drive their academic potentials", the Chairman said.

The 21 contestants presented various professions of their choice to the audience. While the Crown of Miss Somolu 2019 went to Miss Fola Agoro (Oliver Florence), Miss Adebiyi (Taiwo Olaide) got the first runner up gift and Miss Ibukunolu (Eniola Idowu) was crowned second runner up. The newly crowned Miss Somolu went home with a branded new car highmarked for the Winner car, Cornerstone Insurance presented cheques of N200,000 and N100,00 to the first runner up and second runner up respectively.

The Chief Press Secretary to Executive Chairman, CPS Oseni Owolabi Ajimomuya, made the beneficiaries of the scholarship award  known to the audience in person of Miss Taiwo Olaide (first runner up) who is presently studying Business Education at Tai Solarin University of Education (TASUED), Aisha Buari (Miss Agunbiade) who is also a Computer/Physics Student of Federal College of Education (Technical) in Akoka and Dasola Isa (Miss Apata) who is studying Science Laboratory Technology at The Polytechnic, Ibadan.

The scholarship recipients were amazed by the brilliant surprise coming from Mayor of Somolu. Miss Taiwo Olaide, who spoke on  behalf of the said beneficiaries said "this scholarship came at the right time, as it this will relief our parents and also make us to concentrate more on our studies, may Almighty Allah bless the Chairman abundantly as he has blessed us".

A popular printing paper merchant with dozens of shops in Somolu, Prince Adekunle Oyelaja of Kunsman Nigeria Limited was represented by a top management staff of the company to further show their support for the event. While the first runner up was crowned as Miss Peace and Unity, the second runner up was crowned Miss Culture and Tourism. They were cheered up by Somolites who graced the occasion including Hon. Yomi Osunkoya,  (Leader) and Hon. Jide Giwa (Deputy Leader).

Among eminent personalities at the well attended event includes two APC house of assembly aspirants in the recently concluded election, Hon. Adeleke Adekoya and Hon. Taiwo Ojomu. who received an award as 'Mr Innovative'. Mr John Oladipupo also had a pleasant moment with his family and business associates.

According to the Special Adviser on Education to Somolu LG Chairman, Hon. Lateef Ashimi, the scholarship beneficiaries will start receiving their benefits from the wake of 2019/2020 academic session in their respective higher institutions.