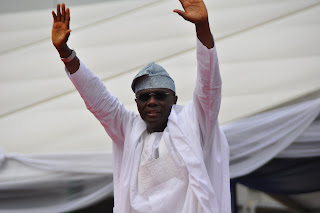 -Lᴀɢᴏs Rᴇᴘᴏʀᴛᴇʀs
The Governor of Lagos State, Babajide Sanwo-Olu, is currently enmeshed in a silent war with prominent members of the All Progressives Congress (APC) in the state over his choice of cabinet members. If not promptly addressed, the crisis may result to the governor inheriting the same fate that befell his predecessor, Akinwunmi Ambode.
Some days ago, Governor Sanwo-Olu transmitted 25 names of his choice commissioners and special advisers to the State Assembly for screening, but the list has been greeted with criticism from members of his party.
According to a source the party chieftains are of the opinion that Diaspora professionals who dominated Sanwo-Olu’s list can’t solve the enormous problems facing Lagos State because they can’t relate naturally with the problems like those on ground.
They have therefore expressed their grievances to the Governor, arguing that he can’t afford to abandon those who worked tirelessly for his election for most of the people in his list, who are just coming to reap where they did not sow.
Only Tunji Bello, Gbolahan Lawal, Toke Benson, Wale Ahmed and a few others are politicians who truly understand the Lagos game that are part in the list.
An APC stalwart told our Correspondent that the party hierarchy are “behaving like a lost dog who will not listened to the whistle of the hunter.” He claimed that “to show that they no longer care about the people and those who are loyal and worked for the success of the party in the last election, they included Tunbosun, son of former commissioner of information in the state, Dele Alake as a nominee in the list sent to the Assembly.”
He further argued that “what does the 28-year-old young boy know in the politics of the state apart from the fact that they’re compensating his father?”
Dr Akin Abayomi, Head of Department of Haematopathology, Tygerberg Academic Hospital and Professor of Haematology, University of Stellenbosch, Cape Town is one of the Diaspora professionals in question.
Also in the list is Rabiu Olowo, a Chartered Accountant (ACMA, CGMA), Certified Internal Controls Auditor (CICA), Certified in International Financial Reporting (ACCA Cert.IFR), and Certified Fraud Examiner (CFE) with an MBA from the University of Lagos.
He was appointed Training Director in Nigeria for the Texas-based Association of Certified Fraud Examiners (ACFE) between 2010 – 2011. He currently serves as an Advisory Council Member with the global ACFE headquartered in Texas, USA.
He has significant experience in evaluating and developing Internal Control Systems for organizations that cuts across multiple industries from Banking & other Financial Services, Manufacturing, FMCG Commercial Operations & Supply Chain, Start Ups etc.
“ Though they will claimed that these people are technocrats but I want to tell you that we have surplus and sound professionals who are party members who also worked tirelessly during the campaign for the success of the party in Lagos State. Yes, most of the Nominees are giants in academia and should be the pride of any party but the issues here are more than Academic qualifications. The main issue for consideration is compensation and recognition for work done and which those that compiled the list have deliberately thrown to the dogs. The issue is about a systematic message being given to Lagosians that “Lagos is a No-Man’s-Land”and they are being brazen about it with the implication that Lagosians (Indigenes) do not have among them, party men and women that can fill these positions.
Many felt scandalized when the present Governor was nominated to replace the former and to the detriment of the indigenous party members. The former and the present Governors are from Ondo & Ogun States respectively. The irony is that, those perpetrating this “In your face shenanigans are the same people that frowned at an Igbo man becoming a Governor in Lagos State. That means, “what is good for the goose is no more good for the gander”?
Participation in Politics is anchored on the desire to use it as a route to be appointed and elected to serve your own people simply because the Law makes it compulsory to belong to a political arty.
To be honest, that list was given to Sanwo-olu and we are all aware of the source.
The perpetrators of the brazen action will get away with it this time around but a note of warning here. That is, nothing lasts (power) lasts forever. History is replete with such events and how Saraki’s hitherto invisibility was unraveled recently in Kwara State should be an abject lesson to the Power Mongers in Lagos State and very soon enough will soon be enough in Lagos too” ,said the party man.
.Another sore point in this whole drama is that many of these nominees doesn’t even have a voters card talk less of knowing anybody in political terrain in Lagos State.
Right now, the aggrieved politicians are waiting and hoping that justice will be done in the second batch of political appointees and that’s if there will be anything like that and if there is none they will only mumble and bemoan their fates.
at July 20, 2019