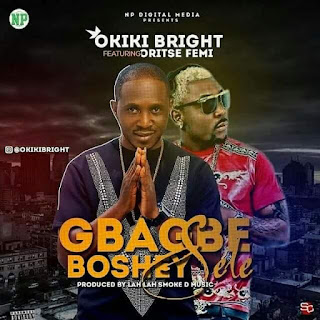 Lagos over illegal use of his intellectual property, ‘Gba gbe boshe sele’ as caller tune without his authorization.

Investigations by members of the Nigeria Guild of Investigative Journalists (NGIJ) reveal that in a suit, FHC/L/CS/1776/17 and dated November 22nd, 2017 at the federal high court, Lagos the promising artiste is asking, among other things, for the sum of four hundred million naira from the four defendants and a perpetual injunction restraining the defendants from continued use of the work.

At the resumed hearing of the matter on Monday 1 July 2019 before the Honourable Justice I.N OWEIBO, Okiki Bright testified and tendered 16 exhibits, contending that , “after recording my song titled ‘Gbagbe bosesele’ a friend advised me to feature a popular hip hop artist in the country so that the song will go viral. I was later introduced to(Oritsefemi’s first name) Oritsefemi’s agent.

“We bargained, I paid the money and Oritsefemi featured in the song as promised. We released the audio and immediately we rushed to release the video in early 2017.

“We were still working on how to make the song go viral when, in October 2017, people drew my attention to the fact that the song is on caller tune of some telecommunications companies. I downloaded the song for N150 on Airtel to be sure it was my song.

“I involved my lawyer, Barr Alayo Akanbi who advised that we should verify this fact and we found out from Globacom website that my music was listed as caller tune and I downloaded the music using codes provided by these telecommunications company and it was listed there.

We then printed it out as evidence. That was when we decided to officially write them for explanations.”

In a letter dated October 18, 2017, Alayo Akanbi Chambers, solicitors to Okiki Bright wrote to 9mobile demanding among other things,  compensation of five hundred million naira (N500,000,000) for the unlawful use of the song.

However, in a letter dated October 30, 2017, 9mobile said the song had been barred from its caller tune platform pending the resolution of the allegations but urged Okiki Bright and his lawyer to direct all queries to MobileXcetera Limited.

Findings by NGIJ revealed that the except for Glo, the telecommunication companies allegedly got the song from MobileXcetera Limited who they believed have paid for the song.

In another twist, MobileXcetera is claiming that Oritsefemi sold the song.“But I called Oritsefemi and he denied any such move. He said since the song does not belong to him he could not have sold it. He told me to go and settle with them,” Okiki supplied.

A quick search by NGIJ revealed that the claim that Oritsefemi owns the song could not possibly be true as all the telecommunications companies listed the song as ‘Gba gbe Boshe Sele by Okiki Bright ft. Oritsefemi. Based on the above one can assume that they understand that the song is by Okiki Bight and that Oritsefemi was only featured in it.

But according to Okiki Bright the road to justice has not only been rough and bumpy but it has been filled with power play and delay tactics.

Although Okiki Bright has come out with another block buster titled Chop make I Chop, he insists he would see his legal struggle through to its conclusion.

In his words, “I had to release ‘Chop make I Chop’ to keep on going, my case in court has really affected me coupled with the manner the telecommunications companies have handled the whole thing.

“I plead with those in positions of authority to come to my aid and help me, the outcome of this case will go a long way in vindicating the judiciary if it is truly the last hope of the common man. As it stands now, justice is on trial”, he declared.
at July 02, 2019