*CROWD, PRAYERS AND JOYFUL TEARS AS DULLAR GIVES TO THE ELDERLIES* 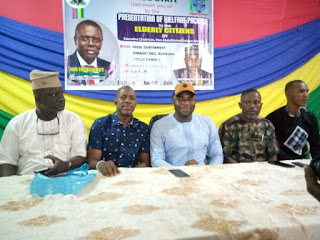 It was a full day earlier today, Thursday, at the council Secretariat of Somolu Local Government was filled with sexagenarians and older ones who had arrived the Banquet Hall very early to get a comfortable seat at the front of the hall for themselves.

Some with their walking stick, some had to come with a younger aide due to their ill-health. Their religions, tribe and background refuse to be barriers to their sitting arrangement.

They all share one thing in common, they had come to receive their  monthly welfare (Ijewun Agba) as arranged by the Mayor of Somolu Local Government, Hon. Abdul Hamed Salawu.

The Executive Chairman who had distributed same welfare package two weeks ago, been for the month of July 2019, arranged over 1,500 food bags for the  elderly citizens who are the residents of Somolu Local Government Area.

While addressing the crowd of the elderly, the council Mayor thanked them for their support and prayers as it has really shown how the grassroot is connected to government of the day and the local government is the closest to the people.

At the welfare programme with the Executive Chairman, include the Executive Vice Chairman, Hon. Bowale Sosimi; leader of the Council, Hon. Yomi Osunkoya and other councilors; the Supervisory Councilors; the Chairperson, Mrs. Omotanwa Yusuf-Salawu; Somolu LGA APC Chairman, Deacon Femi Taiwo; APC Women Leader, Hon. Abiola Fashoro; and many aides of the Chairman.

A septuagenarian, Mrs. Florence Fadipe, said her joy knows no bound about the food items the Chairman gives to them on monthly basis, 'we will be the ones coming for it and he will be the one we will be meeting', mama Fadipe jokingly prayed with relieve.

In his remarks, the Executive Chairman who recently clocked two years in office said, 'despite the fact that we have started and completed dozens of roads, we need to be conscious of the welfare of the aged and challenged members of our community', Dollar said.