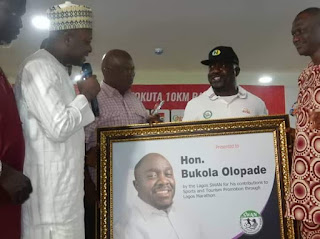 At last we've had the #JACMotorsAbeokuta10kmRace and not a few commentators have described the road racing events as a huge success. In the words of the Executive Governor of Ogun State,  Prince Dapo Abiodun, MFR, 'I regret not joining the last 2 kilometres,  this is a huge success and I'm personally proud of Mr. Bukola Olopade  and his team, please like I told you yesterday hasten up plans on the Remo race. Our government will continue to provide the needed support for the youth and all sport related projects".

For the unwary, Mr. Bukola Olopade is Managing Director of NILAYO SPORT MANAGEMENT LTD; organisers of the race and the world famous Access Bank Lagos City Marathon Race was a former Commissioner of Youth & Sport in Ogun,  and for 8 years he did so much to position sporting activities in the gateway state between 2003 to 2011. His records are there. But when the 2011 politicking surfaced, a few political enemy commenced well planned, strategically orchestrated and intense propaganda, blackmail and high wired slandering about the person and image of the then Youth & Sport Commissioner. He was tagged many unprintable names that I won't want to go into, sadly they made his name synonymous to thuggery. But alas, the trained lawyer is a gentleman with stupendous urge for the socioeconomic development of the youth and the younger generation.

The dreadful false image painted of Bukola Olopade brought so much unconfirmed and unsubstantiated bad press for the Jagunmolu of Gbagura that he almost dumped politicking, but the very intelligent Olopade was undeterred.

Fast forward, while the new government of 2011 to 2019 dreaded the development of sport,  Olopade became a world class brand in sport administration and marketing with his NILAYO SPORTS MANAGEMENT LIMITED and NILAYO FC and the many races in his kitty.

Today, 2nd of November, 2019, history got set as Ogun state witnessed more than 3000 athletes who ran the #JACMotorsAbeokuta10kmRace. Of the many athletes, was a delegation of international athletes from more than 18 African countries. Thousands of dollars was dolled out as cash prizes for different winners and many talents discovered.

Noticeable at the Ake Palace Ground venue of the Finish Line/Concert for the race is the love love the youths of Ogun state showed Olopade. Not few could hold their thoughts that with the new administration of Prince Dapo Abiodun is ready to provide government support for Olopade,  sport development and youth engagement is about to take a leap.to greater heights.

Congratulations to winners of the race, cheers to government of Prince Dapo Abiodun, MFR for supporting a worthy cause, many accolades to the team of NILAYO SPORTs, many thanks to the corporate organisations that supported the project, particularly JAC Motors, Access Bank Plc and Bet9ja amongst many others. Let's meet at Remo in December.
at November 06, 2019