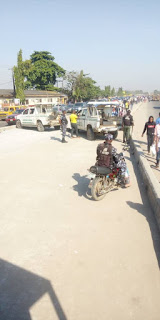 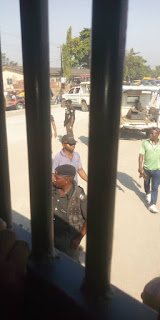 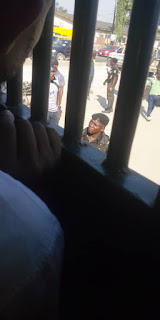 In a brutal show of shame and arbitrariness, Men of the Lagos State Task Force today assaulted a journalist, Mr Kasali Akinwale of The Source magazine, around Ikeja Along axis of Lagos State.

The operatives who were armed to the teeth were said to have carried out an early morning raid on Okada riders around the railway line Ikeja along area in a commando style and were indiscriminately chasing passers-by and pedestrians around the area.

In the ensuing melee, a fleeing okada rider was almost knocked to death by a bus. The journalist who witnessed the scene and cautioned the operatives was severely beaten, teargassed, had his clothes torn before been bundled into the waiting black Maria for daring to intervene.

Speaking on the phone, the brutalised journalist explained that, "They wanted to apprehend an okada man, as they were chasing him, he was almost knocked down by an oncoming bus.

I then approached the policemen that they should be careful, the next thing was they pounced on me, teargassed me and started beating me."

The journalist was later released upon intervention of the Task Force spokesman.
at November 13, 2019