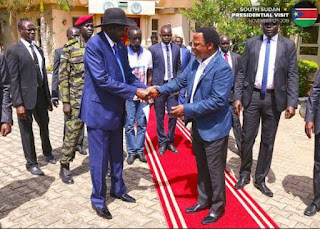 The President Salva Kiir and opposition leader Riek Machar on Monday agreed talks on all the outstanding issues to go underway after Christmas and New Year holidays.

The decision by the two principles to press ahead with more talks comes amid growing international pressure as a deadline looms in February for them to form a unity government.

Tut Gatluak, Presidential Advisor on Security Affairs, told reporters after the meeting at the Presidential Palace that the two leaders agreed that face-to-face meetings will continue after Christmas and New Year holidays.

He pointed out that Kiir and Machar discussed “the implementation of the peace agreement and agreed to maintain communication on pending issues.”

“Dr. Machar is expected to travel to Khartoum on Tuesday, but he will come back to Juba after the holiday season,” Tut said.

According to the presidential adviser, the two principles reaffirmed their commitment to ensure that lasting peace is achieved in South Sudan.

“President Salva Kiir Mayardit and Dr. Riek have wished the people of South Sudan a happy holiday. We want to assure the public that next year will be a year of peace and tranquillity,” he said.

Last week, Kiir and Machar ended days of meetings without breaking a deadlock over the number of states and their boundaries.

Both sides however expressed hope that South Africa’s Deputy President David Mabuza, who mediates the talks on the number of states and their boundaries, could play a big role in bridging the divergent viewpoints of the rival parties in January.

It would be recalled that The President of Sudan had earlier invited Prophet TB Joshua for prayers for peace in the nation on November 12, which he honoured.

Temitope Balogun Joshua also known as T. B. Joshua is a Nigerian pastor, televangelist, and philanthropist. He founded The Synagogue, Church of All Nations, and owns the Christian television network Emmanuel TV.

It should also be noted that TB Joshua gained prominence in South Sudan for his alleged prophecy of a failed coup attempt against President Salva Kiir before the conflict erupted in 2013. And since his visits to South Sudan since November 2019, chains of positive reactions have been an occurrence in the country .
at December 25, 2019