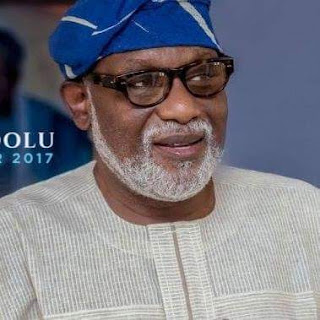 According to the NLC secretary, Governor Akeredolu during the  2019 Workers' Day on May 1 promised to implement new minimum wage, even wen the negotiation was still ongoing at the national level.

''The governor is a lawyer and Senior Advocate of Nigeria. He knows the implementation of New Minimum Wage Law. He is a 'talk and do man', we believe in him. Governor Akeredolu paid five out six months arrears salary for state workers inherited from the immediate past administration of Olusegun Mimiko. He also cleared five out of seven months outstanding salary areas being owed the workers of the local government and primary school teachers."

Shado added that the "incumbent governor  is paying salary and pensions of workers and retirees as at when due.''

He hinted that Ondo State Government has commenced negotiations with Organized Labour to meet December 31 deadline by national body.

The Commissioner said the current administration would continue to prioritise workers' welfare by paying salary promptly despite the paucity of funds.

Igbasan however debunked allegations of heavy taxation raised by the Peoples Democratic Party, noting that the APC administration in Ondo state has not introduced any new tax or level.

’'Governor Oluwarotimi Akeredolu has not introduced any new tax law or policies in the state. Our administration just blocked leakages and introduces technology to sanitize revenue collection system. We have increased Internally Generated Revenue (IGR) from N700million to N1.5billion monthly.'' the commissioner concluded.

The Nigerian Guild of Investigative Journalists, NGIJ arrived Ondo state last Monday for an assessment tour of the current leadership in the state.

Secretary of the guild, Mallam Rahman Aliagan stated that the guild has administered over 10,000 questionnaires  and currently engaging stakeholders in the state to gauge the opinions, yearnings and aspirations of the residents of the state.

The guild is expected to unveil its final findings at a World Press Conference after the completion of the exercise.
at December 04, 2019