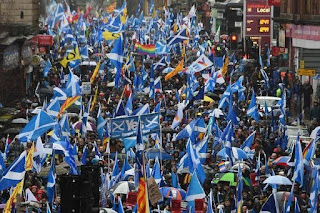 Tens of thousands of Scottish independence supporters have marched through Glasgow in the first of a series of protests aimed to increase pressure for another independence referendum.

The move comes in confirmation of the prophetic message Prophet TB Joshua gave for 2020 regarding United Kingdom.

“There will be agitation from a section that wants to leave; that will become an issue,” he said in the prophecy released on December 28th 2019.

The "emergency" march was organised in the wake of last month's general election, which saw the pro-independence SNP win 48 of the 59 seats in Scotland. Organisers estimated that about 80,000 people attended the march.

Scottish voters backed remaining in the UK by 55% to 45% in a referendum in 2014 - but Nicola Sturgeon, the SNP leader and Scotland's first minister, says she wants to hold another vote on independence later this year.

Four of Joshua’s eleven prophecies have already come to fulfilment – with the cleric revealing the US attack of Iran General Qasem Soleimani, the division between Prince Harry, Meghan Markle and the British Royal Family and the passing of Oman’s ruler Sultan Qaboos bin Said Al Said.