‘There are dreams stronger than death. Men and women dies holding on to those dreams’. These words of American writer, Carl Sandburg, sadly crosses the mind, as the remains of Late Alhaji Fatai Yusuf, popularly known as ‘Oko Oloyun’, is being buried at his hometown Otu, Iseyin in Oyo State, late Friday, according to Islamic rites.
The Lagos-based traditional medicine practitioner was murdered by gunmen on Eruwa-Igbo-Ora Road in Oyo State on Thursday.
Since the gruesome murder of the Founder of Oko-Oloyun Worldwide and De-Fayus International, Alhaji Fatai Yusuf, many have been asking why such a good man could be assassinated.
Meanwhile, there was drama early that Friday,as investors stormed his Lagos office, to demand for the money they invested in his Ponzi scheme,’Option C’.
As the news of his death spreads,those who  invested money in his “Option C” ,became agitated and trooped to the Head office of his company to know their fate. 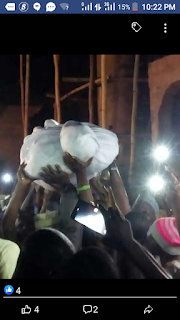 The investors were the more confused as his two offices at Egba Idowu along Igando road in Lagos were shutdown with no one to provide information to the investors.
The investors, however, vowed to take drastic measures if a statement was not issued by the organization as soon as possible.
Just like the day MMM folded up, the investors of “Option C” programme narrated how much they had invested and insisted they could not afford to lose their hard-earned money. 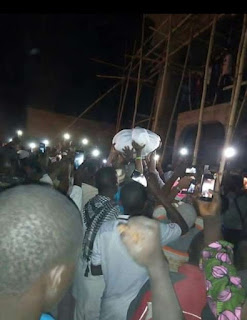 An investor, who chose to be called Emmanuel explained that Option C is a money-making programme that promised a 10% return in two months.
Emmanuel, who was trembling while speaking, added that he invested in the scheme in July 2019 and had only received returns once, contrary to the agreement of two months which was stated.
Mr Azeez, another investor, said he invested N1 million in September 2019 and had decided to pull out after he was not paid in November. He, however, vowed to pursue his profit with all his ability. 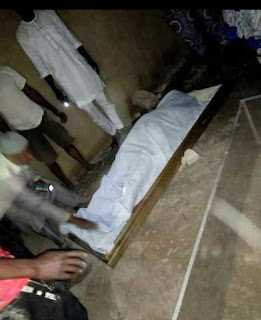 Mrs Bisola said she invested the money sent to her by her military husband who is fighting insurgents in North East. She said she could not afford to lose the money. She urged the management to speak up and address the investment programme issue quickly.
Mrs Bunmi (first name withheld), a retired teacher, who was clearly in shock, stated that she had invested millions having joined the programme in December 2018. She said she had only received N500,000 from her investment and that she was not sure of her fate with the death of Oko Oloyun.
While expressing fear with her documents at hand, she added that she filed to pull out after inconsistency in payment but rescinded her decision when she was told that she could not get her investment back in full.
Mrs. Sulaimon, an investor, said she aborted her trip to travel down from Badagry to Igando when she heard about the assassination of Oko Oloyun.
She noted with tears that she had invested a lot and could not afford to lose her investment. She was however optimistic that the returns would be paid after meeting her co-investors who cheered her up.
However, in the midst of the lamentation, some investors who had visited the house of the late Oko Oloyun in Lagos alleged that they were denied access by the security men, which says “Alhaja said we should not allow anybody come in, they are all in Ibadan.”
After the outcry, the investors agreed among themselves to visit the house of the deceased in Lagos during the Fidau prayers on the eighth day to demand their returns.
However, a security man at Oko Oloyun’s Egan Idowu office alleged that one of the rooms in the head office was intentionally burnt by unknown men prior to Oko Oloyun’s death.
He said the workers who were on duty had been arrested.
Meanwhile, Oyo State Police Command said it has started interrogating the two police escorts that were with Oko Oloyun when he was gruesomely murdered.
The police also appealed to members of the public with credible information on Oko Oloyun’s death to come forward.
at January 25, 2020