The family of Olusope ,was this morning thrown into mourning as the death of the Vice Chairman Lagos State NURTW, Chief Olusope Bodude pass 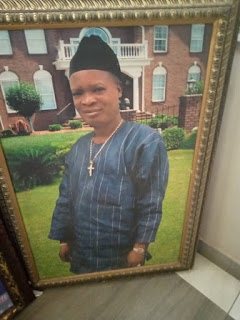 on early hour of today.
who was earlier reported to   illness actually died that he doesn't know how he is feeling,that he was feeling some how in his body overnight and he was rushed to the General hospital,Abule Egba,area of Lagos State Southwest Nigeria.
The doctor was made the announced the death of  Vice Chairman of the National Union of Road Transport Workers Lagos,Chief Olusope Bodude, who also doubled as the Chairman Branch 'A' ,Alimosho ,Lagos.

A reliable source who preferred anonymity told that the late Bodude ,had traveled far and wide,and had helped young and old,had also put smile in their faces.
He come home we were even fishing together when he said ' I don't know how I'm feeling in my body we have to rushed him to the General hospital only for us to hear that after the chemotherapy when he gave up the ghost.

“I believe his condition was made already bad before he was rushed down to the hospital the sickness has already spread to different parts of his body.
The source further told our Correspondent, that the late Vice Chairman had ,who ever had hand in his death should not die again,and if it is natural death so be it,but all I know good people don't last ,because he had been so nice .

According to his wife Chief Mrs. Alimot Abike Olusope Bodude,said," I know my husband death is not a natural death ,someone must have perpetrated this act by cutting my husband's life short.
"The killers of my husband will not see good things in life.
"  The killer of my husband will not know peace.
When contacted the Lagos State Treasurer of the National Union of Road Transport Workers ,Alhaji Mustapha  Adekunle popularly known as sego,who broke the sad new broke the news to our correspondent that,the State executive Vice Chairman is dead.

However, another NURTW member of the deceased, said,"he does not think the death of the Vice Chairman is scientific or natural, noting that the Doctors just said nothing to prove his death.

“Besides my brother, all these (politicians dying) are not ordinary eyes, the medical team will find one diagnosis to call it just to satisfy medical inquisitiveness, ” he told  correspondent on the phone while trying to confirm what killed the Vice Chairman.