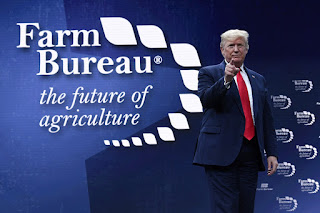 US President Donald Trump has sent a clear message of encouragement to American farmers, promising increased investment in the agricultural sector and dividends from the newly signed Chinese trade deal. 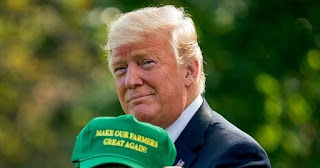 "We are winning for our farmers and we are winning like never before," President Trump told a roaring audience at the American Farm Bureau Federation’s 101st Annual Convention.

"We must ensure that America's farms flourish and prosper and that's what we're doing,” Trump stated emphatically.

“You feed our people, you fuel our nation, you sustain our land, you uphold our values and you preserve or cherished American way of life," he continued, adding that the deal signed with China and the newly negotiated United States-Mexico-Canada Agreement would yield tangible results for America’s farmers.

"Farmers love America, and I just want to tell you that America loves our farmers," he declared to the crowded convention centre in Austin, Texas.

“The best days for America’s farmers and ranchers are yet to come,” Trump said in his enthusiastic message, also touting the $28,000,000,000 his administration had injected into the agricultural sector.

President Trump’s message to American farmers comes on the heels of Nigerian Prophet TB Joshua’s much-publicised prophetic message for 2020 in which he called on America to invest in agriculture.

In his additional message to America, Joshua spoke of the upcoming elections: “Also, approach to the security issue will affect the candidates and swing voters in the next election. It will be tough in the election. They should pray against a recount. It may be too tight.”

Several of Joshua’s 2020 predictions have already come to fulfilment, including the historic fallout between Prince Harry and the Royal Family in UK.
at January 22, 2020