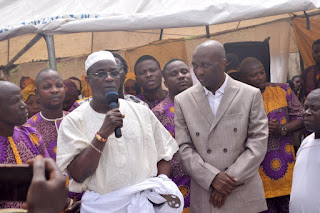 The mayegun of Yorubaland and King of Fuji ,music, Waisu Ayinde has revealed to Nigerians how the leader of INRI Evangelical spiritual church, Primate Elijah Ayodele has made him closer to God over the years.

He made this statement at the birthday celebration of the man of God on Friday, 14th Of February, 2020 at his church, INRI Evangelical Spritual church. It was not an ordinary day for the man of God, he was also honoured by the United Nations in the presence of the Lagos state Governor, Ooni Of Ife, World Peace President, Amb Per Stafsen, South Africa county director, Amb. Chinedu Anthony, to mention a few.

Wasiu Ayinde busted into praising the man of God when he was asked to give his speech. He made it known that some might not see him as a close friend of the man of God but he sees himself as his friend because he has been able to make him close to God in so many ways.

He went back memory land, making it known that he has known the man of God for 35 years and he has never for once lost respect for him.

He revealed that whenever Primate Elijah Ayodele wanted to pass a prophecy across to him, he would write it and seal it before sending to him, yet, he has never for once called him to request for any kind of benefit, he has done all for the sake of the gospel.

However, the height of his speech was when he pledged N4million for the less privileged and promised to sponsor some people to the holy lands of Jerusalem and Mecca

Furthermore, the united nations delegation revealed that Primate Elijah Ayodele will be given a diplomatic plate number, a street named after him in Abuja, a diplomatic I.D Card, to mention a few.
at February 15, 2020