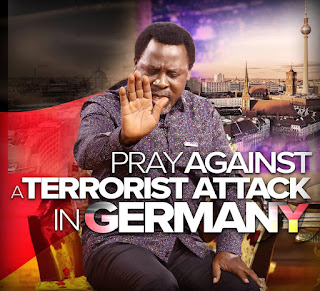 How TB  Joshua predicted The Terrorist Attack Against Germany


When God speaks, the wise listens. Once again the prophetic grace upon TB Joshua came to play after his prophetic warning about Germany was fulfilled.

On March 28th 2019, Prophet TB Joshua gave a prophetic message, calling on people around the world to “pray against a terrorist attack in Germany” and specifically calling for prayer on Thursday.

Late in the evening of Wednesday 19th February 2020, a terrorist attack via mass shooting was carried out in the German city of Hanau, resulting in the death of nine people. The attacker was found dead in his house in the early hours of Thursday 20th February 2020.
at February 20, 2020