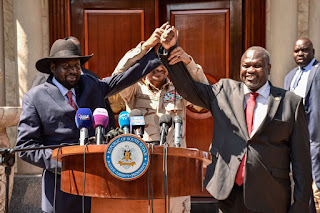 Saturday 22nd February 2020 is set to go down as a historic date in South Sudan as a unity government between once bitter rivals President Salva Kiir Mayardit and opposition leader Riek Machar finally comes to fruition.

“I want to tell the people of South Sudan that all the changes that are taking place right now are to bring peace and not changes that will bring conflict again because we are tired of conflict,” Kiir announced as he officially appointed Machar as Vice President, one of five to be appointed to the new government.

For months, the government and former rebels were at an impasse over the number of states in South Sudan as Kiir unilaterally increased the number to 32 during the recent civil war, which resulted in the deaths of over 400,000 people.

After failing to meet the two previous deadlines to form a unity government, fears of a resurgence in violence were palpable.

However, Kiir chose to compromise “for the sake of peace” and reverted to the original ten states, paving the way for the unity government’s formation.

This historic settlement, a huge step towards lasting peace in the world’s youngest nation, was ‘prophesied’ during the recent visit to Juba by Nigerian Pastor TB Joshua on November 12th 2019.

“I am here to prophesy to the nation. If I am a prophet, this will not go without fulfilment,” Joshua boldly declared in a national address at the Presidential Palace, broadcast live on South Sudan’s state television.

“This country is going to enter a new beginning - whether you like it or not, whether I like it or not,” he continued, insisting that “your agreement does not matter to what God is about to do” and “you cannot stand in the way of the Lord”.

With Kiir and his entire cabinet in attendance during the address, the cleric stressed that “peace has no price” and counselled leaders to overcome all divisions and differences.

“Time has come for us to put our differences behind us. Our leaders, we should overcome our divisions and agree to work together – for the good of this country,” he declared, before leading the leaders in prayer for peace.

Social media in South Sudan was awash with news of Joshua’s visit, with many citizens insisting his prayers and prophetic message were pivotal in the peace process.

“It is the high time South Sudanese should embrace Prophet TB Joshua for his prophecy has come to pass about our nation,” wrote Gum Thany on Facebook.

“Imagine our leaders made historical concessions for the first time just for the sake of peace and this is being coupled with showers of rain in Juba in the middle of dry season,” he added.

Numerous attempts in the past to bring peace between Kiir and Machar proved unsuccessful – including the time the duo were received by Pope Francis in Vatican City where he famously kissed the warring leaders feet.

South Sudanese citizens are hopeful that the new unity government will usher in an era of peace, development and stability.