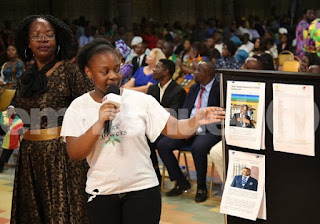 Higgins joins thousands of students worldwide who have received scholarship ranging from primary to tertiary education sponsored by Prophet TB Joshua, founder of Synagogue Church of All Nations (SCOAN) and Emmanuel TV partners.

Nleya was also sponsored by Prophet TB Joshua to pursue her Master’s Degree at Harvard University under the Harvard Law School and was also given an opportunity with the help of the Prophet to get an internship at International Criminal Court at The Hague in the Netherlands.

Higgins received her sponsorship during an all-paid expense trip  by Prophet TB Joshua two week ago  after a special invitation at  SCOAN which is located  in Lagos, Nigeria following an article which was published by Mmegi newspaper.

Higgins, who is currently doing her Form 4 at Selebi-Phikwe Senior Secondary School (SPSSS) was the only student at Nxakato JSS who attained grade A even though she sat for JCE whilst doing Form 2.

In an interview with  Mmegi, Higgins said that words were  not  enough to describe her happiness when she received an invitation to SCOAN by Prophet TB Joshua.

She said that during her first encounter with Prophet TB Joshua she was shivering and all in tears. He added : “Prophet TB Joshua is a holy man and everything at SCOAN  was  godly. I am so fortunate to have had the opportunity  to meet him in person.”

Higgins further said that she was still shocked that everything that happened to her in the past weeks started off with a small achievement of her passing JCE.She hopes to be a cardiologist and said that to her surprise during her one-on-one with Prophet TB Joshua, he offered her a tertiary scholarship to study  what she wants when she finishes her BGCSE.

She also said that Prophet TB Joshua also  appointed Nleya to be   her mentor, role model and contact person for the prophet. Higgins  clarfied  that :“Nleya was the one who showed Prophet TB Joshua the  article.

She is the same person who is going to assist me to apply for Harvard University or any other  university, which is best in Cardiology across the globe.” She added that the scholarship would cover everything including tuition fees, living allowance and accommodation.

She also mentioned that Prophet TB Joshua gave her  $3, 000 (about P33,000) so  that she can purchase educational material to help her prepare for the BGCSE final examination. The  intelligent girl was so determined to study harder at school because there was no way she was going to miss an opportunity to go to Harvard University.

About  her stay in Nigeria, Higgins said she was over the moon because it has been her long term goal to be part of the  congregants at SCOAN. She said that she would always cherish the moment  because she was treated like a very important person (VIP) and accommodated in an executive suite just like in a five-star hotel.

The brilliant student described their experience at SCOAN as something out of this planet especially, the part where they visited  the spiritual prayer mountain. The ever smiling student  said that to make the journey to SCOAN even memorable was the part  where she had to board on an aeroplane for the first time in her life.

She said that she would always thank God for everything, day and night, for making her dream come true earlier than expected. Higgins’s mother Ruth Higgins, who was  equally elated, thanked  Mmegi for writing an article about her brilliant daughter.

Ruth added : “I don’t know how to describe the feeling as it is  out of this  world. The ball is in her court now to work extra harder in order to pass her BGCSE.” The delighted mother said that the bursary gives them assurance as parents that their daughter ‘s dream of studying Cardiology at Harvard University would come true provided she meet the University entry credentials.  Ruth was certain that her daughter would pass BGCSE with merit  because she is a hard worker and well-disciplined  girl.

She expressed gratitude to Prophet TB Joshua for awarding Naomi  the tertiary education scholarship and to God for giving  her abundance of blessings. Ruth also thanked one of the beneficiaries of Prophet TB Joshua’s education bursary Nleya who discovered her daughter.

She shared that they learnt that Nleya also received  scholarship from Prophet TB Joshua and Emmanuel TV partners  years back  when she was just an ordinary visitor at SCOAN. She also described Nleya as a guardian angel who made her daughter’s dream turn into reality. Naomi’s father, Kenneth Higgins said that he was extremely overjoyed of his daughter’s achievements. He said that his daughter’s achievements have brought admiration to his family.

Kenneth said: “This is what all fathers dream of and this is what we want for our families. I give all the honour and glory to the almighty God and Prophet TB Joshua for this grace from God. I am very much humbled by the kind gesture.” He said that Naomi’s achievements would go a long way in motivating her fellow peers on the importance of taking education seriously and to aim high and reach great heights.