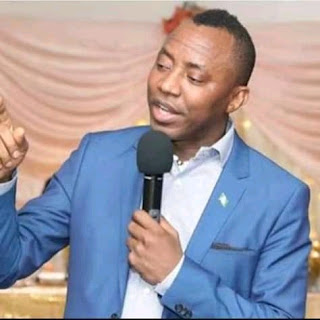 Lagos The Federal Government has been asked to immediately desist from political harassment and intimidation of Sahara Reporters publisher, Mr Omoyele Sowore. Sowore was kept in detention amidst a rash of court orders none of which guaranteed his freedom in the recent past.  There are concerns in the human rights circle that in the wake of the COVID-19 outbreak, Sowore's life may be at risk.

In statement issued at the weekend, the foremost Nigerian advocacy group, Human and Environmental Development Agenda, (HEDA Resource Centre) said the organization is worried about the fate of Sowore in the light of the growing lockdown occasioned by COVID-19 spread. HEDA said the group is also touched by the recent outcry from Sowore over alleged plans to endanger his life.

The statement signed by HEDA's Chairman, Mr Olanrewaju Suraju said the Coronavirus outbreak present fresh grounds why political detainees should be set free, as recently proposed by the Minister of Interior, Ogbeni Rauf Aregbesola, and not unscrupulous attempt by certain officials of government, civilians or military, to detain any person for political reasons.

"The Federal Government can better guarantee protection for Sowore and other citizens by issuing a stern and clear warning to officials of government to refrain from any form of political or unwarranted arrest of citizens under the current situation."
The journalist who was held since August 6 last year raised the alarm early this week that his life was in danger with a recent attempt by some unidentified government officials attempting to use the judiciary to legitimise political persecution of the activist.

HEDA said it was deeply concerned about the plight of Mr Sowore especially at a time when the whole world is at the peril of a global lockdown.

Sowore in  a mid-week release said there were plans  by the authorities to pick him up from his location to a military barracks where he alleged he would be tortured and infected with CONVID-19.

Sowore said he had written through his  lawyers to the Chief Judge of the Federal High Court, apprising him of the plot by the Nigerian Army seeking to detain him for revealing "classified information on SaharaReporters." The medium had reported that the Chief of Staff, (CSO) to the President, Mr Aba Kyari tested positive to the coronavirus sparking fury in the Presidency which later confirmed the report.

Sowore had said "their  latest bogey is to make it sound like I am part of the network of terrorists in the country, under the same guise they fraudulently obtained a detention order from Justice Taiwo Taiwo on August 8, 2019 claiming I went to Dubai to collect money to overthrow the bumbling regime, when they discovered I had never been to Dubai, they quickly dropped the terrorism claims, and instead filed some other ridiculously malicious charges that they haven't been able to prosecute till date."

Sowore said upon disclosure of Abba Kyari's COVID-19 status, officials urged  "the Chief of Army Staff, Gen. Tukur Buratai to get his army to go to court in order to get another detention order to detain me in a military facility where I could be tortured and infected with COVID-19 under the bogus assertion that I am revealing classified information on SaharaReporters."

'At this period of CONVID-19 pandemic, this is a difficult moment for Nigerians who are free. For those in detention, their ordeal will multiply. Sowore and  Bakare were arrested in August 6, 2019. They fall into the category of those that would have been vulnerable if in detention. We are worried about precautions taken by the government to protect Sowore and other citizens to protect them from repressive actions of government officials. What are the provisions to prevent exposure of detainees and prisoners to CONVID-19". Suraju said.

Suraju also argued that at present, Sowore's wife and children who live in New York, the centre of the CONVID-19 pandemic, need the attention of their loved one.
at March 30, 2020