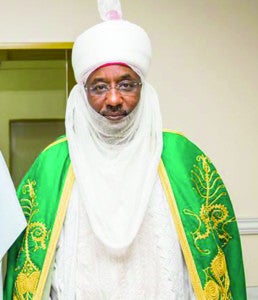 The leader of INRI Evangelical spiritual church, Primate Elijah Ayodele’s 2020 Prophecies has once again come to pass. This time, it has to do with royalty and football.

Primate Ayodele in his usual way of releasing prophecy for a new year hosted Journalist in his church on 24th Of December, 2019 to release prophecies of things that will happen in 2020.

Surprisingly, some of his prophecies started coming to pass even before the end of the meeting and this seriously shook those that were around for the meeting.

Similarly, his prophecy on the death of a football player and dethronement of Emir Of Kano has just been fulfilled.

‘’Let us pray not to lose two kings, Emirs, Ezes and of course let’s pray so that no King is dethroned. The government will want to reduce the strength of the Emir. They should pray against running into unexpected crisis. Let us pay against fire outbreak in any of the palace. There will be confrontation between the government and the traditional ruler’’

‘’ NFF will experience in house problem and the NFF President will face challenges that will trouble some of his actions. Let the association pray not to lose any of their members. I foresee rancor in the Board. Let them pray against litigation. Nigeria will have problems with the company designing the branded shirt.  They will go into contract with another company. They may be accused of non-payment of player’s allowance. Some coaches will be sacked. Our Under 17 coach will have major problems. Let the players pray fervently so as not to lose any of the players……’’

Just as he said it, some weeks ago, there were news of a Remo stars player who was allegedly shot dead by SARS operatives, and days ago, the death of a Nassarawa FC player who slumped and died on the field.

No doubt, Primate Elijah Ayodele stands out among other prophets in Nigeria with the continuous fulfillment of his Prophecies. Countless times, he has seen issues ahead of time, even before others see it.

He has also declared APC National Chairman seat, Adams Oshiomhole seat vacant following the fulfillment of his prophecy that the chairman will be faced with suspension and removal cases.
at March 09, 2020