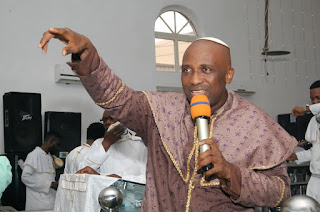 There has been uproar on the social media scene and in the camp of the presidency for some hours over the death of the Chief Of Staff to the President, Abba Kyari, after he failed to survive the deadly hands of Covid-19.

The announcement of his passing on by the president’s media Aide, Femi Adeshina shook the country as there has been indications that his condition has gotten worse since he was being hidden weeks after he tested positive.

Just as it is known spiritually, nothing occurs without the knowledge of the real men of God, a fast check by this publication has revealed that the leader of INRI Evangelical Spiritual Church, Primate Elijah Ayodele had predicted all these occurrences some years back.

In his annual book of prophecy titled warning to the nations (2018/19), he stated that the spirit of God is asking us to rebuke the spirit of death in the presidency

Also, during the release of his prophecies for 2020 on December 24, he made another statement that the country should pray against death and fire cases in the villa.

Just as he predicted and warned, his words have come to fulfillment with the death of Abba Kyari, the closest aide of President Muhammadu Buhari.

Furthermore, it is pertinent to note that there has been crisis and several complications as a result of Covid-19. Just few days ago, the United State Of America stopped funding the World Health Organisation. These also, is a fulfillment of the man of God’s prophecy

‘The united state of America and the United Nations will have issues because their funds will be reduced by USA ( Warning to the nations 2018/19 pg 194).

It would be recalled that Primate Elijah Ayodele predicted the coming of Corona Virus in China, predicted its coming into Nigeria and has also come out with a divine solution to it according to the directives of the spirit of God which are Anointing Oil and Water.

This stands the prophet out among others as he is the only one who has boldly come out to make such move.

Also, he warned that President Buhari should not extend the lockdown beyond 27th Of April  else there would be massive protest and economic shutdown, stating that the President needs prayer.
at April 18, 2020