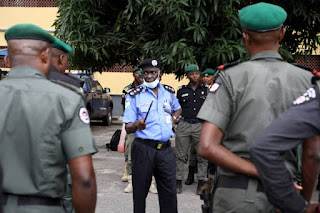 Lagos State Police Command has received several calls and messages mostly from residents of Igando, Idimu and Ikotun among others, that a criminal gang known as “one million boys” are planning to attack their communities. The Command responded with a massive deployment of Police patrol teams to beef up the security of the areas mentioned and other parts of the State. Police Special Forces are strategically positioned, patrolling the length and breadth of the State.
2. It could be recalled that the Inspector General of Police IGP Mohammed Adamu Abubakar NPM, mni has graciously deployed a seasoned crime fighter, DIG Peter Babatunde Ogunyanwo fdc, to Lagos in order to have an on the spot assessment of the situation in Lagos and Ogun as well as to coordinate the ongoing onslaught launched against criminal elements. The IGP has equally deployed Special Forces to support the tactical units initially deployed by the Commissioner of Police Lagos State, CP Hakeem Odumosu psc.
3. The Special Forces were last night deployed to Igando, Idimu, Ikotun, Agege, Dopemu, Abattoir, Mangoro, Alakuku, and other parts of Lagos State to provide round the clock Patrols. The teams have clear instruction to deal decisively with criminal elements operating under whatever guise,  in accordance with the law. The Command will not relent on its efforts in protecting the lives and properties of the citizens and residents.
4. Members of the Public, especially residents of the communities mentioned above, are enjoined to remain calm and support the ongoing efforts of the Police in ridding the state of criminal elements. The Command with the support of the good people of Lagos State, has dealt a big blow to this criminal gang and several other gangs over the last four months. Over 800 members of the gangs and their leaders were arrested and charged to Court. They are still in correctional centres. No criminal gang is capable of unleashing terror on our communities. We are far bigger and stronger than any criminal elements.
5. Rumour mongering and spreading fake news pose a lot of dangers to our collective efforts in crime prevention and control. Before pressing the forward button or putting that call across, take some time to verify the source of the information. Avoid being a courier or victim of spreading fake news. Together we will continue to keep Lagos safe.
6. For information or complaints call the following numbers 09010512285, 09010512286, 09010512287 and 09010512288.