Arrest of 16 Social Miscreants/Cultists in Itire and Ikorodu. 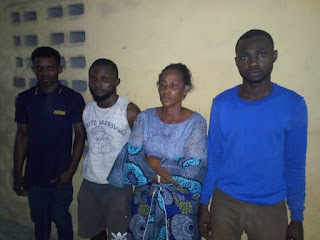 On 8/05/2020 at about 2000 hours, acting on credible information about the activities  of some suspected cultists at Ogunmuyiwa Street, Itire, operatives of Special Strike Force on social Miscreants were deployed to the area. Ten suspects were arrested, namely: Ahmed Ajibosi 'm', Quam Gabriel 'm', Rasheed Afolabi 'm', Terry Ebode 'm', Ibe Ugochukwu 'm', Yusuf Abubakar 'm', Uche Ndubuisi 'm', Lateef Akintunde 'm', Ojo Sunday 'm' and Wale Sodiq 'm'. In a related development, on 9/5/2020 at about 0940hrs, Shagamu road Police  Station received a distress call that some miscreants are fermenting trouble at Agric bus stop Owutu. On receipt of the information, a team of detectives led by the Divisional Police Officer was promptly deployed to the scene. Six suspects were arrested, namely: Olushola Shotola 'm' 33 years old of No. 16 Ito Oluwo, Ijede; Samuel Adebayo 'm' 28 years old of No. 2 Itupate Ikorodu; Umaru Ibrahim 'm' 23 years old; Ayo Idowu 'm' 30 years old of No. 35 Oladimeji Street, Idiroko Owutu Ikorodu; Gbolohun, Gbolahan Adeola 'm' 18 years old of No. 3 Ajayi Street Aruna Ikorodu; and Hammed Lukman 'm' 35 years old of No. 14 Agbowa Street Oke-oko, Ita-Oluwo Ikorodu. Investigation is ongoing, the suspects will be charged to Court.
2. Four suspects arrested for allegedly killing a 16 year old house girl in Bariga.
On 9/05/2020 at about 1130hrs, Bariga Police Station received an information that one Shade Moke 'f' 41 years old conspired with three others on 29/2/2020 and killed one Halimat Sodiq 'f' 16 years old over an  allegation of stealing. The victim is said to be a house help to Shade Moke. She was alleged of stealing #2000 from her madam which she denied. That the madam invited the remaining three suspects who tortured the girl to death. They buried her secretly at Atan cemetery Lagos, so as to conceal the murder. The four suspects were arrested but they denied the allegations. They however, admitted slapping the girl for denying that she stole the money. They claimed that the girl went into convulsion after drinking water. That they took her to three different hospitals before she eventually died. That the girl was buried by her parents not the suspects. The parents were also contacted for their statements. The Commissioner  of Police Lagos State, CP Hakeem Odumosu psc has ordered the immediate transfer of the case to the State Criminal Investigation Department Yaba for discreet investigation and diligent prosecution. The suspects will soon be charged to Court.
3. Man arrested over the death of a woman while settling dispute in Mushin.
On 02/05/2020 at about 0045hrs, one Anuoluwapo Adeyemi 'f' of Itire Road, Mushin, reported at Mushin Police Station that on 01/05/2020, while having a discussion with her husband, who came visiting, as they live apart, one Owolabi Fasasi 'm' of Ogun Street Mushin, suddenly appeared, threatening to go away with her three months old baby, Kausarat Owolabi 'f'. That he did not explain why he is taking her child away. That people around made frantic efforts to pacify him but he refused. That he kept on shouting and threatening violence, insisting to take away the child. Tragedy occurred,  when he was dragging the baby in order to actualize his threat. He pushed the boss of the child’s mother, one Taiwo Adekoya 'f' who was one of the sympathizers and she became unconscious. The victim was rushed to Hospital, but was later confirmed dead. The corpse was deposited at the mortuary for autopsy. The suspect was arrested by homicide  detectives. Investigation is ongoing. The suspect will be charged to Court.
4. Spiritualist arrested over the death of a woman during childbirth in a church.
On 4/5/20 at about 1950 hours, one Olaloye Jolayemi ‘f' of Ologundudu Street Aboru reported at Oke Odo Police Station that on 4/05/2020 at about 1000hrs one Seun Olorunto ‘f’ 39 years old died after she was delivered of a baby boy by one Prophetess Evelyn Owoleke 'f' at Cherubim and Seraphim Church, Bayo Ajao Street Aboru. Homicide detectives visited the scene and found the woman laying in the pool of her blood, suggesting that the deceased person might have bled to death due to complications. The corpse is removed from the Church to General Hospital Yaba for autopsy. The infant is taken to hospital for medical examination and care. The traditional/spiritual midwife was arrested and taken to State CID Yaba. Investigation is ongoing.
5. Police investigating the circumstances surrounding the disappearance of a teenager from Orphanage.
On 04/05/2020 at about 1110hrs, one Madu Ernest ‘m’ the Administrative Officer/Social worker of Finger of God Orphanage Home, Governor,s Road Olorun, reported at Ikotun Police Station that on 30/04/2020 at about 0700hrs, one Daniel Michael ‘m’ 15 years old was discovered missing from the orphanage home and efforts made by the Orphanage to trace his whereabouts proved abortive. The missing teenager is dark in complexion. He speaks Yoruba and English languages fluently. He is a citizen of Togo. Investigation is ongoing to unravel the circumstances surrounding his disappearance and to trace his where about.
DSP Bala Elkana,
Police Public Relations Officer,
Lagos State.
at May 10, 2020