Can Tinubu Sleep with His Two Eyes Closed? 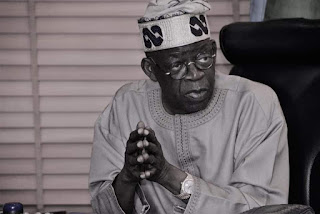 Raheem Akingbolu writes that Senator Bola Ahmed Tinubu, National Leader of the All Progressives Congress is under pressure from persons persuading him to vie for the highest office in the land

Against all odds, Bola Ahmed Tinubu, the national leader of the All Progressives Congress (APC), has continued to enjoy news mention more than any politician in the last 20 years.

Since 1999, when he was elected Governor of Lagos State, the maverick politician has remained a man of all seasons.

Perhaps more than any individual, he has, since the beginning of the current democratic experience, faced and led many ‘wars’ more than any known politician around and came out unscathed.

Few weeks ago, in commemoration of his 68th birthday, his political friends and foes explored many platforms; including hundreds of paid advertorial in the newspapers, radio and television to celebrate his contribution to democracy.

The tributes and the encomiums poured in so well that not even the news of the dreaded COVID-19 epidemic could outshine them.

But has that given the strongman of Lagos politics the assurance that all is well?

To the best of my understanding, the answer is, ‘No.’

As an experienced politician, Tinubu needs nobody to tell him that he’s enjoying a long honeymoon because he’s still politically relevant.

Today, even those who don’t agree with Asiwaju Tinubu, will find it extremely difficult to ignore him.

But the truth remains that he needs to be more circumspect and careful especially at this time when everyone seems to be persuading him to vie for the highest office in the land.

From all the advertorial that were placed by different individuals and groups, it is safe to conclude that it was not done for altruistic reasons but rather for patronage either from those who have benefited from his political benevolence or those who are still hopeful that one day, the political leader will throw ‘food’ on their table.

Beyond the glamour and attention that annually greet the politician’s birthday colloquium, it is high time the Yoruba nation embraced him as the leader they need at the moment to navigate the testy waters of national politics.

I don’t want this piece to give me away as one of those canvassing for Asiwaju Tinubu to throw his hat into the ring in 2023, I want to use it to call on people of the South-west to recognize and appreciate him as the rallying point to negotiate the exalted position.

If there is anything that qualifies him for this role, it is his cosmopolitan personality and foresight which has worked for him on many occasions.

It is on record that more than any political leader in this part of the world, Asiwaju Tinubu has identified more talents and supported more resourceful individuals to clinch positions either through appointment and election at state and federal levels in the last 20 years.

To paraphrase it in Tinubu’s own words; he’s indeed a talent hunter, who uses the best hands, the best brains and the best experience to get jobs done.

Over the years, he has fielded best hands, best brains and best experiences into offices nationwide.

Another edge the colourful politician has more than anybody is the fact that he has built bridges across different geo-political zones, with many of his political lieutenants scattered in almost all the 36 states of the country.

Since he emerged in the political space, he has grown in the stature of late Moshood Abiola, the acclaimed winner of the June 12 1993 election who became the choice of all including the North that has one of their own vying for the same position as at that time.

Like an experience politician in the mould of the late sage, Chief Obafemi Awolowo and Dr. Nnamdi Azikwe, his interest is always about the common good.

Despite his political sagacity, Awolowo’s political foes, especially those outside the Yoruba nation were always quick to dismiss the defunct Unity Party of Nigeria leader as being too connected to his Yoruba root.

Unlike Awolowo, even though MKO Abiola was envied by the Igbos and the Hausas, they couldn’t write him off as an ethnic bigot.

This is where a political actor like Tinubu also fits in.

He can’t possibly be written on the basis of tribalism. It is easy to conclude that a lot have since changed but one thing still stands him out, Tinubu combines the political wizardry of Awolowo with Abiola’s cosmopolitan outlook.

With this, he stands a better chance of successfully taking the Yorubas to their political promised land in 2023 and beyond.

Going by Nigeria political history, any nation in the polity that fails to have a political rallying point in the mood of Sir Ahmadu Bello, Dr. Nnamdi Azikwe and Chief Obafemi Awolowo, is doomed.

If for any reason, what became of the Yorubas after the demise of Awolowo, Abraham Adesanya, Adekunle Ajasin and Abiola are enough to convince anyone.

The same could also be said of the Igbos, who flew kite with the Great Zik of Africa –Nnamdi Azikwe, Alex Ekwueme, Dim Emeka Ojukwu, and Chief Chuka Okadigbo, who all had the political shrewdness and intellectual capacity to lead their people.

In both situations, the only snag that militated against reaching the desired goal came when fifth columnist set up brothers against brothers and things fell apart (apology to Chinua Achebe).

Before both nations could realised their mistakes, their political backbone had been broken beyond any surgery operation could be thought of.

The rest is history.

From any angle one choses to look at it, till date, opinion leaders outside Yoruba race still hold Chief Awolowo in awe.

Every day, they imagined the height he could have taken his people to if he had his way but his meteoric rise in politics was scuttled with connivance of his own people.

For instance, while he held sway, Chief Awolowo was able to transform the South West into an educational and industrial hub in Africa building a robust political climate in the process.

As a leader with foresight, Awo appreciated the place of education so much that he made it his priority.

Under him as Premier of Western region, education was free and affordable.

To further raise the stake, he made available a lot of scholarships to outstanding Yoruba youths to access education within Nigeria and outside the country.

But at the end, the same people he toiled day and night to develop were used to kill his ambition of becoming the president of the country on two consecutive occasions.

Between 1951 when the Action Group was formed and 1983 at the twilight of the Unity Party of Nigeria, Obafemi Awolowo was the undisputed hero of the Yoruba tribe.

It will be recalled that the post-colonial era of Nigerian history was dominated by three actors, Nnamdi Azikiwe, Obafemi Awolowo and Ahmadu Bello.

But since the trio has been out of the nation’s political space, no tribe has bestridden Nigerian political space like the Hausa-Fulanis, parading top political leaders and retired military heads as replacement for their falling heroes.

However, the two major ethnic groups have been quite unlucky in the political equation of the country.

They have consistently been eluded in the scheme of things because both the Igbos and the Yorubas have surreptitiously allowed personal aggrandizement to becloud their political vision of having a leader.

Sadly, in both cases, selfish leaders from the regions were used to frustrate the political growth of those who could fly their flag.

Perhaps MKO Abiola would have fitted into the role for the Yorubas, the annulment of the June 12 Presidential election of 1993 which was to usher in the much anticipated third republic after ten years of military reign by the Northern military oligarchy frustrated the process.

While it could be argued that the fallout of the annulment deepened the cold war that long existed between the Igbo and Yoruba ethnic groups, it is easy to conclude that Yoruba leaders, including the traditional rulers were used as tools to throw spanner into the agitation to reverse the annulment.

Like the Yorubas, the Igbos have also had opportunity to have a rallying point in many successful leaders, including the late war veteran, Dim Emeka Ojukwu, Alex Ekwueme and the cosmopolitan Chuba Okadigbo, a man with intellectual credentials and exposure but unfortunately the Igbos were not there for them.

Today, the Igbo nation, like their Yoruba counterpart, has no identifiable leaders that can rise above personal quest or material aggrandizement.

For the Yorubas not to suffer the burden of leadership vacuum in Nigeria politics, the time to act is now.

Over time, arguments have surfaced as to who is the Yoruba leader between former President Olusegun Obasanjo and Tinubu but many of us think the argument is unfounded because the answer is obvious.

Though Chief Obasanjo has had the opportunity to occupy the highest political office in the country on three occasions; that hasn’t made him a rallying point because he was like a child of circumstance, who was foisted on the nation by those who saw him as a willing tool.

A close study of his political antecedent reveals a man who think only of himself and not his people.

One other thing –many analysts, among Yoruba scholars have consistently challenged General Obasanjo on the fact that he was a major actor in the scheme to frustrate the ambitions of both Awolowo and Abiola.

Till date, he hasn’t cleared his name of that mess. As the greatest beneficiary of the June 12 saga, it was expected that the former President would use the opportunity to honour Abiola posthumously to pacify the Yorubas.

The irony of this was that when Prof. Wole Soyinka stood against Obasanjo when the latter was aspiring to become the Secretary General of the United Nations in 1991, Abiola took it upon himself to broker peace between the two of them. M.K.O didn’t only beg Soyinka, he mobilised prominent Yoruba leaders, including traditional rulers and their old school mates at Baptist Boys’ High School, Abeokuta, to appeal to the literary giant.

To the late business mogul, Obasanjo as Secretary General would boost Nigeria’s profile on the internationally scene.

Now that Yoruba appear to be at the crossroads, leaders of thought should rally round Asiwaju Tinubu and call to order, some individuals who knowingly or unknowingly are being used to nail him.

For the man himself, he shouldn’t get carried away by the arrays of political folks who are chorusing ‘Hosanna’ today because most of them are but fair-weather friends, who will disappear when the chips are down.

Is Asiwaju Tinubu a perfect man? No. He’s human.

He has his strengths, and his weaknesses. We all do. But in the interest of the larger picture, this piece is meant to appeal to Yoruba leaders to give this political oracle the opportunity to be the captain of the ship –at least for now.

With him as the pathfinder, we can all have glimpse idea of where we are heading.
at May 12, 2020