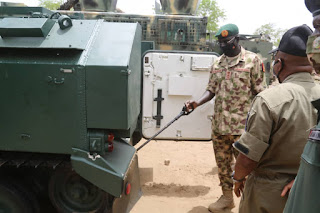 The Chief of Army Staff Lt Gen TY Buratai who is in the North East Theatre of Operation since early April this year leading the fight against terrorism has inspected ongoing manufacture and repairs/overhaul of combat vehicles including Armoured Personnel Carriers and mine resistant anti Ambush Protected Vehicles at the 107 Div Equipment Support in Maimalari Barracks, Maiduguri on Saturday the 30th of May 2020.

Gen Buratai was accompanied by the Chief of Training and Operations (Army), Theatre Commander Operation LAFIYA DOLE, Chief of Logistics (Army), chief of military intelligence and the Acting General Officer Commanding 7 Division among others.
This is in continuation of the efforts at ensuring the final defeat of Boko Haram/ISWAP's terrorism in Nigeria.
at May 30, 2020