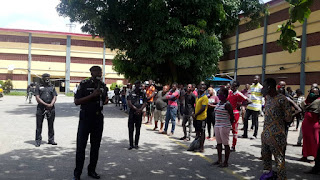 State Police Command on enforcement of COVID-19 orders arrested 121 suspects for violating the curfew. 58 suspects were arrested for not wearing face mask in public. The Command impounded 79 vehicles during the curfew hours.
2. The suspects along with the 148 suspects arrested during the weekend for violating lockdown order were charged to Court, bringing the number of suspects charged today to 325. They were sentenced accordingly. Some of the suspects were given 4 hours community service while others were awarded fines of #2,500 and #3000 respectively.
3. The Commissioner of Police Lagos State, CP Hakeem Odumosu psc and other senior  officers went round the State on the first day of the curfew to monitor compliance. The CP is impressed with the level of compliance and looks forward to huge improvements in the coming days.
4. On 5th May, 2020 the Commissioner of Police Lagos State and his counterpart in Ogun State visited the Police Check Point at the boundary community in Ojodu berger manned by personnel of Lagos and Ogun States. Security is tightened at the boundary community to restrict non essential interstates movements.
DSP Bala Elkana,
Police Public Relations Officer,
Lagos State.
at May 05, 2020