Once beaten, twice shy. This very common but important words may have defined the reasons why a handful of Nigerians most especially customers of financial institutions trooped out in their large numbers to storm the banks in order to rectify their accounts in one way or the other.
According to a privileged information made available to us, this move was necessarily taken by the people to guide against yet another sudden pronouncement of a nationwide stay at home order by the presidency which hit them unprepared.
The last two months have, therefore being those of a painful experience of brutal hunger, gnashing of teeth and visible regret of no preemption. It was indeed almost 60 days of abject poverty or what could simply be defined as an impromptu financial colonization. Save for the humanitarian and philanthropic gestures of some kind-hearted compatriots who benevolently gave out relief packages like food items and cash, Nigeria could have recorded an amazing death rate not basically from the rampaging corona virus but from what the people termed as death virus.
Yes, many lives would have been lost if not for some of these God-sent individuals who voluntarily ignored donating their cash to the federal government but made them available to vulnerable Nigerians. However, one of the banks that has greatly benefitted from the Nigerian populace since its establishment more than two decades ago suddenly and in a show of errant wickedness turned its back on its benefactors and bit the fingers that fed it. The bank is none other than Guarantee Trust Bank popularly called GTB. This bank  founded by retired banker, Fola Adeola and late financial guru, Tayo Aderinokun added salt to the injuries already sustained by Nigerians during the Covid ’19 lockdown.
It was a sour tale left to be told by customers of the Herbert Macaulay, Alagomeji Yaba, Lagos branch of the bank who trooped to the premises on Tuesday, the 5th of May, 2020 expecting the bank to give them a friendly treatment but were left aghast and flabbergasted as staff of the bank including the security officers connived to add more to their customers’ painful tales. It was confirmed by our reporters that the customers were forced by the security guards at the said Alagomeji branch to part with a sum of N1000 before they could be ushered in for attention. This, we gathered was with the knowledge of the workers in the banking hall including the branch manager.
We also scooped that customers were coerced to stand or sat in the scorching sun with the deliberate snail movement level at which the bankers attended to customers which paved way for the accumulation of more people in the bank’s premises. In a thorough investigation conducted by our reporters, we gathered that the bankers at the Alagomeji branch of GTB have suddenly turned themselves to semi gods by displaying unnecessary wickedness to their own customers many of whom want to get some money available to combat the hunger effect of another possible lockdown as may be announced by President Muhammadu Buhari towards the weekend. The entire situation was so disgusting to an extent that the security personnel at the bank ignorantly asked our reporter, a journalist to part with 1000 to be able to cover the ugly scenario as summoned by the angry customers of GTB, Herbert Macaulay, Alagomeji Yaba branch. The video covered as regards this event is available on HCS TV, youtube channel. Definitely, it is obvious that all those working in the Herbert Macaulay, Alagomeji, Yaba branch of GTB are criminals and undeserving elements handling the finances of innocent and hard working Nigerians. This is therefore a clarion call to the Central Bank of Nigeria and other stakeholders to look critically into this financial mess perpetrated by GTB staffers before it gets out of hand.
Here is the video link on HCS TV Bellow:https://www.youtube.com/watch?v=tHC0dQikclA&t=91s 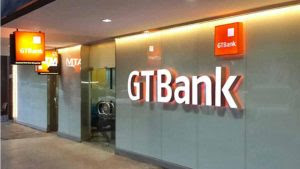