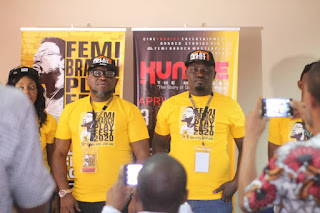 “We thank the Federal and State Governments, the NCDC and especially our frontline workers for their selfless and tireless efforts to safely ferry us through these trying times. We thank our Sponsors who have come on board already and call on other Corporate entities and individuals to partner with us to make these 1000 dreams come true.”

It will be recalled that on 15 February 2020, Chief Femi Branch had announced plans by his entertainment outfit to tour no fewer than 10 Nigerian cities across Nigeria, from April 3rd to June 21st, 2020.

He disclosed this to newsmen at the Excellence Hotel, Ogba, Lagos venue of a press conference he organised to raise awareness for the maiden edition of the  Annual Femi Branch Playfest, a celebration of theatrical writing of the Nollywood actor, one of Africa’s leading actors, playwright and poet. 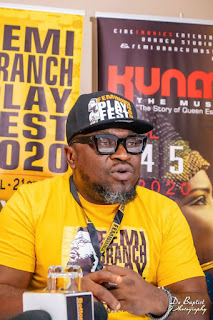 At the press conference, he had announed that the Festival was scheduled to kick off his biggest play yet, Kunme The Musical. He had  hinted that the tour would take a one-week break in Lagos from Monday 25th to Sunday 31st, May 2020 for the Festival proper which shall feature performances by different selected troupes of Femi Branch’s other plays, such as Poi, Shalanga, Jungle Justice, and Ankara Committee, with final performance being of the tour play, Kunme. Thereafter, he said, the tour would then resume from Friday 12th and end on Sunday 21st June in Abuja, the Federal Capital Territory, with host cities as Ife, Akure, Ado Ekiti, Ibadan, Abeokuta, Ijebu Ode, Ikorodu, Badagry, Benin City, and Abuja.

However, the outbreak of the Covid-19 pandemic had put paid to the initial schedule of the event.

The project has Lady Prevail Olayinka as its Project Director, Tee Abiola Oduola (Sean Polotee), as Media Consultant, Ben Ogbeiwi as Music Director, Anuli Onwuadi, as Project Coordinator, as well as a host of other professionals.
at May 26, 2020