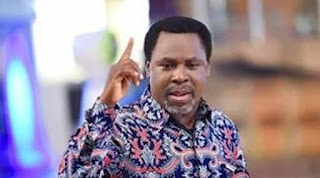 The respected Pan-African magazine ‘The Africa Report’ has written a detailed report on Tanzania’s unique approach to the coronavirus pandemic, citing the faith of its President John Magufuli and his relationship with Nigerian Pastor TB Joshua as a mitigating factor.

With just months to go to the end of his first term, Magufuli is making global headlines as his administration continues its unusual approach to controlling COVID-19 within its borders.

On 3 May, Tanzania’s head of state triggered shockwaves after he said fruits and inanimate objects he had had secretly sent to the East African nation’s main lab had come back positive for COVID-19, casting doubt on the efficacy of testing kits they had received from the World Health Organisation (WHO).

While President Magufuli’s scientific background makes him a rarity among his peers in the region, the outspoken leader has clearly decided to rely more on faith than science, insisting on not closing down any churches or religious gatherings or initiating a strict lockdown.

He was recently seen in pictures at a ‘prayer mountain’, seeking God’s intervention for his nation.

“Other than the chemistry doctorate and a decade and a half spent serving in the cabinets of two of his predecessors, there’s little in President John Magufuli’s recent political and personal life that suggests he would have reacted any differently to a health crisis,” the article in The Africa Report details.

“For example, the Tanzanian president is a follower of popular Nigerian preacher T.B Joshua,” the report explains, adding that Joshua had controversially revealed the virus would stop spreading in Wuhan, China from March 27th 2020.

Around the same time, President Magufuli asked the nation to “use the three days from 17th to 19th April to pray to God to help us evade this disease”.

“When he landed in Tanzania for Magufuli’s inauguration ceremony in 2015, Joshua was treated like royalty, and welcomed into the country by the outgoing president, the incoming president, and the head of opposition at the time,” the article continues, revealing the extent of the Nigerian Pastor’s relationship with the ‘Bulldozer’.

“Joshua is widely popular in certain parts of Africa, including among southern African leaders, and over in Latin America. On Magufuli’s election, several news sites claimed it was the preacher who had encouraged his presidential ambitions as early as 2011,” it continued.

They also referenced the video on Emmanuel TV in which Magufuli’s eldest son explained how “the Nigerian preacher had healed him of a respiratory disease in 2013 when modern medicine had failed”.

Magufuli visited Joshua’s popular church in Lagos several times prior to his ascendancy to power and his wife Janeth was among the thousands in attendance at the cleric’s crusade in Nazareth, Israel in June 2019.

Whilst maintaining scepticism over the test-kits, Magufuli is also one of the first African leaders to order a consignment of the Madagascar-made herbal treatment for coronavirus.

TB Joshua recently made headlines when pictures surfaced of his time at an undisclosed ‘Prayer Mountain’.

Upon his return, the cleric warned of impending hardship that would accompany the aftermath of COVID-19, advising citizens to “be ready to start little, cut your coat according to your cloth and endure temporary pain”.
at May 12, 2020