Two in Police Net Over Kidnapping And Armed Robbery, Two AK 49 Rifles Recovers From The Syndicate 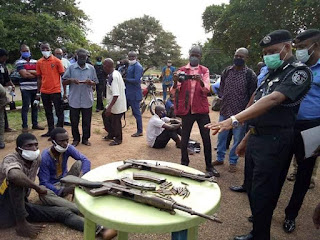 The duo of Wakili Mohammed 34, and his crime partner Alli Ismaila Baree aged 36, has been paraded by Oyo State Police Command Eleyele Ibadan for Kidnapping and armed robbery cases.

Briefing journalists on the development, CP. Olukolu said the suspected criminals were arrested on 30, 04, 2020, at about 8:00Pm. The CP. Stated that it took the combined efforts of the Police team and the Vigilante Group detailed at a spot near Esarun Village in Ido town along Eruwa/Igbo-Ora road to got the suspects arrested.

While speaking with the SouthwesternNewsUpdates, one of the Suspects Wakili Mohammed said they were actually on their way to to Odo-Ogun in Ado Awaye Village of Eruwa to abduct a cattle dealer.

He said, we were arrested on our way to Odo-Ogun in Ado Awaye Village of Eruwa, we were arrested by the Police and Vigilante team, we are actually going to kidnap one cow dealer for ransom,  before we were intercepted and got arrested I regret my actions.

However, the State Commissioner of Police, CP Olukolu said since the suspected criminals have confessed to the crime, they have also been helping the police in their investigation to arrest other fleeing members of the group, they will soon be charge to Court of law for proper trail.
at May 15, 2020