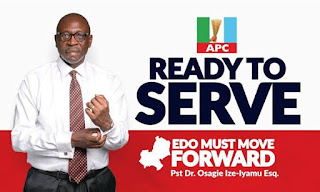 It is evident that the leadership of the Peoples Democratic Party (PDP) is still mystified by the hands of God in the current political trajectory of the All Progressives Congress (APC) governorship candidate in Edo State, Pastor Osagie Ize-Iyamu, and is therefore struggling to conflate issues in the September 19 governorship election.


The first and most cogent point is that Comrade Adams Oshiomhole is not the reason their flustered new intake, outgoing Governor Godwin Obaseki is running from pillar to post to save his head in the election. The truth is that Obaseki is
a misfit that has been roundly rejected by the people, through whom God the Almighty has raised Pastor Ize-Iyamu as a worthy replacement.


For a man, who has spent nearly four years in office without something tangible to his name outside fighting both real and perceived enemies, it was only a matter of time before Obaseki was shown the way out and it was also simple logic that he had since shut the door of re-election against himself.

Shall we also say the PDP is suffering selective amnesia, when it cited as reason Pastor Ize-Iyamu, may not become governor, the fact that Comrade Oshiomhole, an individual, talked him down some four years ago at a campaign rally, when indeed, it
left out completely what it said as a party asrecently as six months ago.

We recall that not only did the PDP say a badly disapproved Obaseki, who is now its beautiful bride had stolen all of Edo’s money; it gave a blanket remark that the governor was a total failure. This was just six months ago. Whatever changed between then and now clearly tells more of the character in the People Deceiving People political association called the PDP.


The earlier the PDP realises this battle is already lost and won, the better for Obaseki, who might end up squandering the little he is meant to keep for life post-governorship. Let no one get it twisted, Obaseki’s fate has been sealed by God, and the good people of Edo State. Unanimously, our people have said it, loud and clear, enough of the last four years of misfortune as represented by the Obaseki administration.

Not only do the Edo people deserve better, they have better choices from the array of fantastic brains that God has endowed them with. The PDP can dust up their generally precluded oddball, perhaps, for their other roguish uses. But, definitely not  the governorship seat, which has been sanctioned by God and man as Pastor Ize-Iyamu’s.