Freedom finally came the way of Prophetess Evelyn Owoleke of Cherubim and Seraphim Church, Bayo Ajao Street Aboru area of Lagos following the dismissal of the murder case against her and three others at the Lagos state Magistrate. 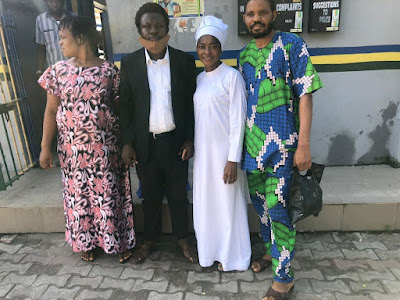 Famously known as Iya Alaago, the spiritual mother and three others who have been under detention for the past one month were  alleged by Olaloye Jolayemi of Ologundudu Street Aboru  killing her daughter, Seun Olorunto who died after she was delivered of a baby boy by the Prophetess at her Church.


At the magistrate Court 2, Ogba  the judge after perusing the legal advise from the Lagos State Director of Public Prosecution, Mrs Olayinka Adeyemi  that a prima farce case of murder can not been established against Ia Alaago and others.

Ore Moshood Abdullahi, legal practitioner and counsel to Evelyn Owoleke argued that Iya Alaago was wrongly accused and that her arrest,and subsequent newspapers publications labeling her as a ritual killer even before legal action against her was wrong. Ore Moshood, Owoleke’s lawyer while referring to a video interview in Punch Newspapers website urges media practitioners to report crime incidence with caution.

“You can imagine many people would have formed an erroneous opinion by the newspapers publications and here we are, justice has been finally served as Madam Owoleke is now a free woman” Ore Moshood added.

Owoleke was arrested on the on the 4th of May, 2020 by the police.  the police  arrested the spiritual mother and three others while the corpse of the diseased was removed from the Church and taking to the General Hospital Yaba for autopsy”.

The police said that the infant was also taken to hospital for medical examination and care while the traditional/spiritual midwife was arrested and taken to State CID Yaba for further investigation.

Upon completion of investigation, the police sent the case file to the state Ministry of justice on the 15th of May, 2020, to seek legal advice.

In his response, Mrs. Adeyemi, on the 8th day of June, 2020 issued a legal advice, suggesting that the accused persons were not guilty of murder charge. The legal advice which was sighted by Investigation Media contradicts the medial trial which has put the spiritual mother in a bad light.

Marked LJP/HOM/2020/88/6, THE COMMISSIONER OF POLICE VS EVELYN OWOLEKE, BOLA WAHAB, FEMI ADISA: CR 1063/2020, the state’s Justice department advised that “After carefully considering the facts available in the duplicate case file, this office is of the view that facts available do not disclose a prima facie case of murder contrary to section 222 of the criminal law Ch. C17. Vol. 3 Laws of Lagos state, 2015, against the suspect Evely Owoleke, Bola Wahab and Femi Adisa”
at June 21, 2020