How Akpabio Forced NDDC to Release False Allegation Against Nwaoboshi 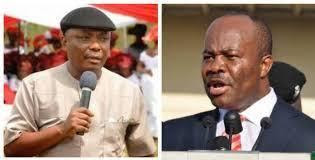 In a statement on June 8, Odili accused  Nwaoboshi of using 11 companies as fronts to secure himself a N3.6 billion contract in September 2016.

"We believe that until Senator Nwaoboshi can absolve himself of his role in the looting of the resources of the commission, he should step aside from any investigative activity against the commission,” he had said.

"From our findings, the person who has questions to answer to the Niger Delta people is Senator Nwaoboshi."

But the senator has since denied the allegation and filed a defamation suit against Odili.

Sources told our correspondent that Odili has become afraid following the suit filed against him by the senator.

"I can tell you that he is worried. He was made to level those allegations against the senator now he has been dragged to court,"  a source said.

There have been allegations and counter-allegations following the decision of the senate to probe the NDDC.

While the senator has accused Akpabio of getting a N300 million fencing contract, the minister asked Nwaoboshi to respond to allegations by commission.

The NDDC accused members of the national assembly of inserting over 500 non-existent projects into the agency’s 2019 budget.

The IMC is expected to undertake a forensic audit of the commission’s finances from 2001 to 2019. President Muhammadu Buhari ordered the audit in October 2019.
at June 19, 2020