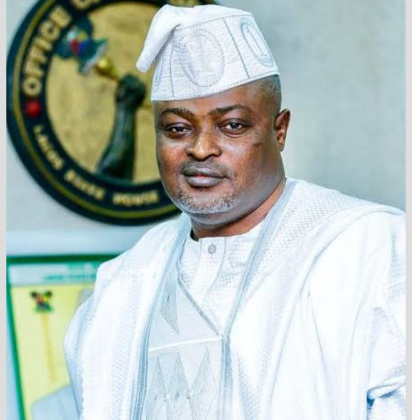 Members of the Lagos State House of Assembly on Monday passed a vote of confidence on the Speaker of the House, Rt. Hon. Mudashiru Obasa.

This confidence vote followed the presentation of the report of a nine-man fact-finding committee of the House on allegations of corruption levelled against the speaker by Sahara Reporters headed by Hon. Victor Akande (Ojo constituency 1) during plenary.

The committee was told to investigate the allegations of corruption levelled against the Speaker part of which bothered on operating 64 accounts with banks with different names.

The Speaker was also alleged to have unilaterally approved expenditure for programmes and activities in the House, and spent N258 million to print invitation cards for the inauguration of the 9th Assembly.

Sahara Reporters also alleged that the Speaker received N80 million as estacode and that his wife was collecting N10 million from the House on a monthly basis.

There were also reports that the House purchased 11 Hiace buses as well as 80 cars for the lawmakers within a year without following due process.

The committee, in its report stated that all the allegations were frivolous and that the Speaker followed due process in all his purchases.

Part of the committee's recommendation is that the clerk of the House should begin the process of investigating the leakage of some documents to the press and bring the erring staff members to book.

The committee also recommended that the activities of the House should be digitalised for proper record keeping and monitoring.

It was then suggested that vote of confidence should be passed on Speaker Obasa having realised that the allegations against him are all false.

Hon. Setonji David (Badagry 2) moved the motion for the adoption of the recommendation of the committee and this was supported by Hon. Temitope Adewale (Ifako Ijaiye 2).

The whole members agreed with the recommendations based on a voice vote conducted by the Majority Leader of the House, Hon. Sanni Agunbiade, who acted as the Speaker during the sitting.

Earlier in his report, the committee chairman, Hon. Victor Akande, had surmarised the findings and stated that the House was concerned about the damaging allegations against the Speaker by Sahara Reporters.

He said the 9-man adhoc committee was constituted by the House to investigate the allegations made against him.

The committee, Hon. Victor said, was mandated to invite Sahara Reporters and others to prove their allegations against the Speaker.

"The committee started sitting on Thursday 4th June, 2020 and we also sat on Friday 5th June and Saturday 6th June.

He, however, said that all the banks invited including Ecobank, Wema Bank, Polaris and Zenith Bank denied the allegations that the speaker had multiple accounts with them with the same BVN and different names.

The lawmaker stated that the committee found that the Speaker has just one account with Ecobank, which he opened in 2007, but that the account is dormant and that the BVN quoted for Ecobank was not correct.

"The Speaker does not have multiple accounts with Ecobank, the BVN ascribed to Wemabank does not belong to him and the companies attributed to him in Wema Bank are not correct.

"Out of the 14 accounts attributed to him for Zenith Bank, only six belong to him and only two are active.

"The companies ascribed to him in Zenith Bank does not belong to him. The Deputy Speaker did not attend any trip in Dubai as against the reports of Sahara Reporters," he said.

The committee also stated that it found out that the purchase of vehicles for the lawmakers were ratified by the Fund Management Committee (FMC) of the House in both the 8th and 9th Assemblies.

It was also revealed that the purchase of Toyota Prado and Land Cruiser cars for members were approved by the FMC and the Lagos State Public Procurement Agency (PPA).

"The purchase of operational vehicles for members of the 9th Assembly was approved by the FMC members.

"The purchase of 36 Toyota Prado and 6 Land Cruisers were budgeted for and approved by the PPA. The allegations of spending N64 Million for social media influencers was not true.

"The USA trip was attended. Only eight Hiace Buses were purchased for committee works and staff buses. Contrary to the claim of N258 million spent for printing invitation cards for the inauguration for 9th assembly as only N61 million was spent for the event and N1.1 for invitation cards.

"The facility management company in the House does not belong to the Speaker. The alleged N10 million paid to the speaker wife is not true," he said.
at June 08, 2020