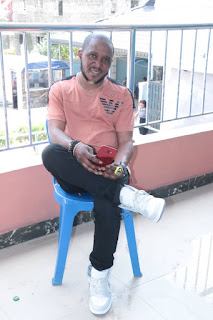 The talented artiste who lamented that Fuji music is no more competitive, explained that he will  delving into Fuji to fulfill his long cherished desire.

It would be recalled that Okiki Bright had dragged telecommunications giants in the country to court some years ago over intellectual theft  of his song Gbagbe Bosesele featuring Oritse Femi.

On the reason for his new found love for Fuji, Okiki Bright disclosed that the love for Fuji music runs in his veins and assured he would entertain his fans with good Fuji music anytime he is called upon to do so.

While stressing that Fuji music is no longer competitive in Nigeria he noted out that top Fuji musicians in the country are self centered and don't want upcoming ones to grow.

In a newly released song, the talented artiste accused top artistes like Wasiu Ayinde K1, Saheed Osupa, Abass Obesere, Alabi Pasuma and many others  of being prodigal sons who inherited the Fuji genre of music from late Sikiru Ayinde Barrister but refused to support the upcoming generation to grow in the music industry.

He however advised young upcoming Fuji musicians to be focused and bold in facing any challenge that comes their way as none would come to their aid but themselves. He opined that, "you should know that the so-called established and popular musicians won't help you because they are not good leaders and lack the qualities of good Fuji leaders," he said.

Okiki Bright further assured his teeming fans that he would be more focused and promote  Fuji music as he is ready to compete with any top musician in Nigeria.

"I have the talent and the voice all I need is to put in the hardwork and I assure my fans that I will do just that. As a talented artist with late Barrister's voice, I believe the late fuji king's fans will still prefer me to all these top Fuji musicians who are self centered and can't help the upcoming ones to achieve their goals," he noted.