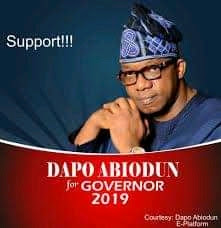 Good morning Sir,  my name is Faleye Oluwatosin Simon. I gave my full names because you may need it to initiate my arrest after reading this message.


I am actually writing on behalf of the suffering and deprived members of a section on of the the state you govern. Ifo LG.

Your Excellency has obviously shut Ifo local government out of your area of concern except when levies are collected and the people leaving in the area have been abandoned to their own fate.

The people on daily basis grapple with  the multiple effects of very deplorable roads.

May be your cronies are afraid to tell you Sir, Ifo local government has been practically disconnected from the space under your jurisdiction as a result of impassable roads.  But its funny how you remember to collect tax and other levies from this LG even when you know your government does not deserve these things.

If the roads were fixed it could stand as a revenue for the state if tollgate is fixed.

If you may know sir, residents and good people of  Ijoko, Abule, Ope-ilu, Agbado, Adiyan, Agbado Crossing Oke-Aro, Matogun, Lanbe, Akute and others all in  Ifo L.G are Highly Disappointed and have ceased praying for you  and your Government because all these area mentioned above have  no road or any good link road to neighboring LGs.

Mr Governor, in case you don't know, the population of these areas in question is arguably the largest in the state but they have  no good road, no water, no power supply and no other government presence in any form.

As I write this, the people have given up on your government. They are ready to endure this for the 8 years envisaged for your government ,as they are aware mandates renewal in this clan may not necessarily be on the basis of performance or number of votes garnered.

Its however not too late to redeem your name and image before these people.

We understand you are a successful Businessman, but  governance is not a one man business. Must you also fail because the past government in the state failed to do the bidding of the people?

You Can Still Do The Needful Sir.