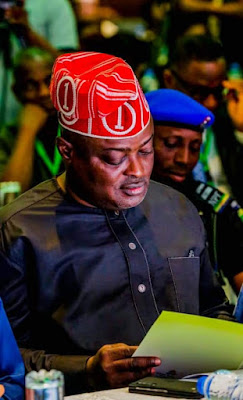 The Speaker, Lagos House of Assembly, Rt. Hon. ( Dr.) Mudashiru Ajayi Obasa, has described that the death of Isiaka Abiola Ajimobi, immediate past governor of Oyo state, as another  great loss to the Southwest and Nigeria, especially happening few days after the demise of a respected senator, Sikiru Adebayo Osinowo.

Obasa, in his condolence message released by his media office on Friday, said he was particularly pained that death had to snatch Ajimobi at a time his experience was seriously needed by the ruling All Progressives Congress (APC) through which he governed Oyo state.

According to Obasa, who is the chairman of the Conference of Speakers of State Legislatures in Nigeria, Senator Ajimobi was a consummate politician who will be greatly missed by the country and its people including those he served as governor.

"Senator Ajimobi was one of the few Nigerian politicians who transversed  both the corporate and political world and made success of both.

"He died at a time the country and the APC needed his wealth of experience and  wisdom from both worlds," Obasa said.

He urged the family of the deceased to take solace in the good work he had done while alive.

"I pray the Almighty Allah grant him aljarnah firdaus and give his family the fortitude to bear this huge loss," the Speaker pray.
at June 26, 2020