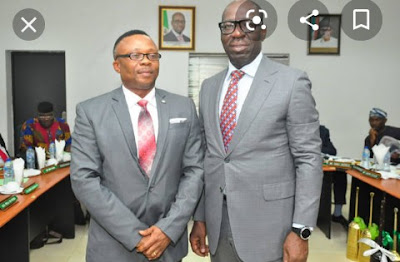 The Ijaws in Edo State have applauded Governor Godwin Obaseki for engendering economic development and improving the lives of Edo people, reaffirming support for the governor’s reelection bid to ensure continuity of his sterling performance and consolidation of good governance in the state.


The Ijaw communities under the aegis of ‘Ethnic Nationality’, declared their support for Obaseki’s second term bid when they paid a courtesy visit to the governor at the Government House, Benin City.

Commending the governor for his achievements, representatives of the communities, High Chief Hon. Joel Wodubamo; Prominent Chief Hon. Daniel Agagha, and Mr. Ebiye Milton, urged Governor Obaseki not to relent in his vision of transforming the state and positively impacting the lives of Edo people.

Receiving the governor's supporters, the First Lady, Mrs. Betsy Obaseki, said: “There can be no meaningful development in an atmosphere of rancor. Development is a gradual process and I urge you to always embrace peace and dialogue for the sake of development.

She continued: “The Governor is a lover of development; the era of sharing public funds to few individuals is over in Edo State. All of that is now in the past; that is part of the reason they are fighting the governor because he has decided to put the interest of the larger Edo people first."

The First Lady reiterated that it was because of the governor’s passion for his people that he worked with the past administration for eight years as the Head of Economic Team without any payment, noting: “I was personally told by the former Governor of Edo State, Comr. Adams Oshiomhole that my husband was the brain behind the achievements of his administration.”

Mrs. Obaseki reassured: “I will bring all of your complaints to the Governor; I know he will look into them and attend to them one after the other.  The Governor has touched every sector of the state, including education, through the Edo Basic Education Sector Transformation (EDOBEST) programme, the revamp of Primary Health Care (PHCs) Centers across the state, the newly revamped Secretariat Complex, construction of roads and completion of long abandoned projects by previous administrations, among others.”

“I urge you to be rest assured that Edo State will be one of the most developed states in Nigeria before the completion of his second term because we are the heartbeat of the nation and without the heart, the body cannot function.

“We will continue to sue for peace in the Niger Delta, with your support and patience, the Gelegele Seaport, which is already in the pipeline, will bring about landmark development in the state and its environs,” she added.
at July 29, 2020