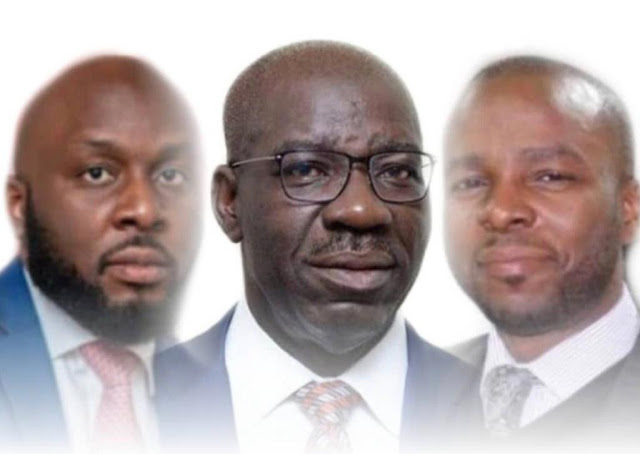 The Edo State Chapter of the All Progressives Congress has called on the Nigeria Police Force to immediately arrest and prosecute Mr. Kabiru Adjoto and Osaigbovo Iyoha,
both of whom are senior aides of Governor Godwin Obaseki, over their alleged involvement in the hiring of armed thugs in the invasion of the Edo Assembly complex earlier this month.

At least seven thugs were arrested within the Edo Assembly Complex on the 6th of August when the embattled Edo Governor, alongside his Deputy, Mr. Philip Shaibu, led hoodlums and other party supporters to block and vandalize the Assembly complex in a bid to deny entry to majority seventeen elected members.

The arrested thugs, who were brought before a Judge at the Benin High Court on Monday, were caught with five double-barrel long guns, two single barrel long guns, and 10 live cartridges and have reportedly confessed during interrogation that they were hired and provided the illegal firearms by Mr. Kabiru Adjoto and Mr. Osaigbovo Iyoha.

At a press briefing on Tuesday, Col. David Imuse, the Edo APC Chairman, charged the Police to commence an immediate investigation of the involvement of the identified aides of Governor Godwin Obaseki who, according to him, have no constitutional immunity and are thus liable to arrest and prosecution.

He also tasked the Police to resist an alleged attempt by the Edo State Government to unlawfully release the seven suspects standing trial for unlawful possession of firearm and disturbance of public peace.

He said: “The police must wake up to its responsibilities. These two people mentioned are not immune and should be arrested and investigated.”

"It is very disturbing that a government that ought to protect its citizens is encouraging criminals to unleash mayhem on Edo people.”

“We find this development very disturbing and we are charging the Police to carry out a comprehensive investigation on the established ties and nexus between the criminal group, members of the Edo State Government, and illegal purchase and distribution of firearms.”

“It goes without saying that the case, wherein the suspects have already allegedly confessed their ties to the Edo State Government, further affirms our outcry on the illegal arms buildup carried out by Governor Godwin Obaseki and his Deputy, Mr. Philip Shaibu, through a retired Police officer from Kogi State, Mr. Aruna Yusuf, who continues to act with impunity.”

Mr. Osaigbovo Iyoha and Kabiru Adjoto have been trailed by several reports and accusations of involvement in violence and illegal ties to cult groups. Back in 2017, Kabiru Adjoto, as a member of the Edo Assembly, led a similar invasion of the Chamber when he attacked the then Speaker, Hon. Justin Okonoboh, and triggered a violent fisticuff which made the rounds on the internet and drew widespread condemnation.
at August 25, 2020