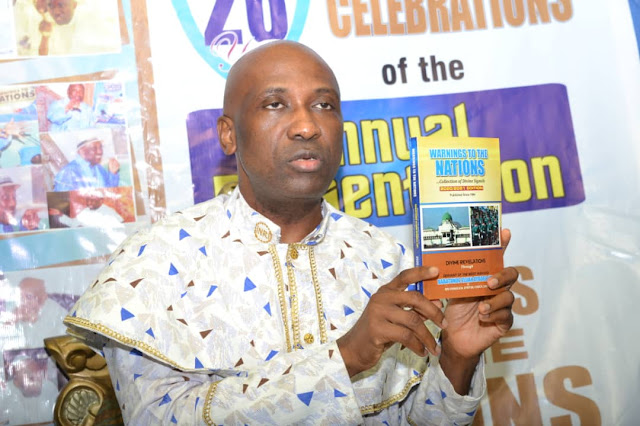 The leader of INRI Evangelical spiritual church,
Primate Elijah Ayodele has set a huge world record with the simultaneous release of a compendium of more than 10,000 fulfilled prophecies and the 2020/2021 edition of his annual book of prophecy titled ‘Warning to the nations’.

The event which held on Saturday, 22nd of August, 2020 in his Lagos church had dignitaries from different walks of life in attendance, it also had several media practitioners who graced the record breaking launch.

The compendium contains 10,000 fulfilled prophecies of the man of God from 1994 till date while the newly released 2020/2021 Edition of the Warning to the nations is a 376-paged book that contains divine revelations, warning, prophecies to Nations, world leaders, corporate organizations, individuals, to mention a few.

Also, the 2020/2021 Edition of WTNs is the 26th edition, which according to many, has served as a divine guidance to countries, Presidents, individuals, organizations, since its inception.

Some of the highlights of the warnings to the nations include prayers against loss of a Saudi Arabian prince, the removal of the President of Guinea, Outbreak of diseases and attacks in Sri Lanka, Monarchical problem in Spain, Problems between America and China, Hidden secrets being exposed in Nigeria Presidential Villa, Break in Nigeria, to mention a few.

While addressing the attendees, Primate Elijah Ayodele expressed gratitude to God for his continued support, strength and divine prophecies since the beginning of his ministry up till the present moment.

He explained that the release of a compendium of 10,000 fulfilled prophecies and the 26th edition of his annual book of prophecy was as a result of divine instructions from God.

‘The release of this books wasn’t borne out of my wish to show off some of my prophecies that have come to pass, it was as a result of divine instructions by God. I have been releasing ‘Warning to all Nations’ since 1994 to God’s glory and it was just an instruction I received from God.

I thank God for his faithfulness to my prophetic ministry, it’s not an easy task to have more than 10,000 prophecies fulfilled, I return all glory to God almighty’.

Furthermore, Primate Ayodele explained that warnings are meant to give individuals, nations, organizations a preview of what lies ahead of them, making it known that whenever such arises, precautions and prayers are the things needed to do.

‘As a prophet, you are required to tell people what is ahead of them because you can see beyond them as a spiritual person. Whenever you see a challenge and you tell them about it, what is required of them is take spiritual precautions and prayers.

Warnings are not to scare them, they are not to make them feel uncomfortable, they serve as an exposition of what they haven’t seen, hence, the need to take them serious

It’s unfortunate that some people don’t take the words of true prophets serious, this is also why unpalatable happenings occur, people don’t heed to warnings, which is sincerely wrong’.

It is worthy of being noted that some warnings in WTNs 2020/2021 have started coming to pass. Some of them include the Fire incident in Ooni of Ife’s palace (Pg 106), the removal of Mali’s President (Pg 162), the current unrest in Belarus (Pg 126), to mention a few.

Although the official launch was on Saturday, 22nd Of August, information revealed that it had been published months ago but due to the restrictions on gatherings, the launching was delayed.

No doubt, Primate Elijah Ayodele has proven severally that his ministry is one of its kind judging by the rate of record-breaking heights he has attained.
at August 24, 2020