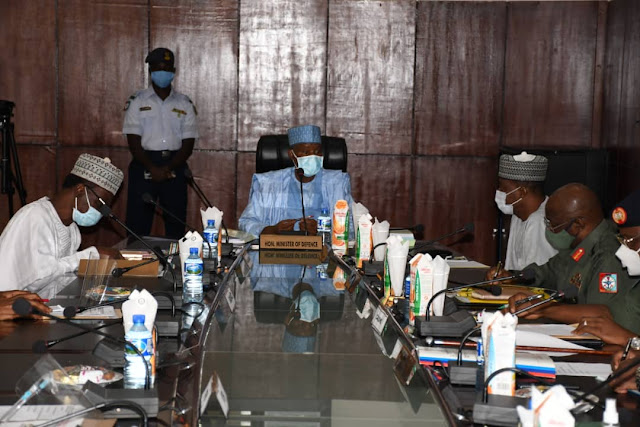 The Minister of Defence Maj Gen, Bashir Salihi Magashi(rtd) has granted audience to the leadership of all the veteran groups at the conference room of the Ministry, Abuja.

This was contrary to the allegations in some quarters in the media that the Minister is too busy to attend to the grievances of the veteran groups until 2021.
The meeting which was held against the background of maintaining an "Open door policy" in the management of the Military Veteran Affairs had in attendance all concerned parties.
The interface had on the side of the Minister's team, the Permanent Secretary Ministry Defence  Sabi'u Zakari, Director Joint Services Department Mrs Olu Mustapha, Principal General Staff Officer (PGSO) Brig Gen Auwal Fage, and Special Adviser (Technical) to the Defence Minister Maj Gen Ahmed Tijani Jibrin (rtd).
Also in attendane at the crucial meeting with the representatives of the Veteran Association was the Chief of Defence Staff Gen Gabriel Abayomi olonisakin, Chief of Defence Account and Budget Maj Gen Jahadi Ezra jakko, Chairman Military Pensions Board Maj Gen A.B Adamu And the Director Veteran Affairs Defence Headquarters.
On the other side of the divide were the leaders of the Nigerian Legion, Veterans Federation of Nigeria (VFN) Coalition of Concerned Veterans (CCV) and the Retired Army, Navy and Airforce. Officers (RANAO)
The borne of contention according to the Veterans is that they were unjustifiably excluded from the payment of the Security Debarment Allowance (SDA) aimed at preventing retired personnel from using the knowledge and skills acquired while in the service against the state. While making an appeal for inclusion in the payment of the SDA, they argued that they too met the required criteria to be paid having acquired knowledge and skills while in the service.
Other issues raised by the Veterans include the need to address the wide gap between the Pensions of the Brigadier Generals and the Major Generals and  incremental  issue as a result of the increase in the Minimum wage,
Others include the issue  of restricted  NHIS for the Veterans and the need to institute burial support for the Veterans.
Responding the Minister of Defence who is also a bonafide member of the Veterans  said the issue  of SDA shouldn't be a reason to protest pointing out that the provision in the Manual of the Financial Administration for the Armed Forces is clear.
While briefing  the meeting, the Chief of Account and  Budget Defence  Headquarters  Major General  Jakko recalled that President Muhammadu Buhari signed and approved SDA on the 24th February 2018 but backdated the policy to take effect from  9th November 2017 payable to all personnel on retirement  pointing out that the policy does not cover the agitating Veterans who retired before this date.
The Minister who played the role of arbiter however directed the Chief of Defence Staff, General  Olonisakin to take a look at the issues presented by the  Veterans with a view to addressing their concerns..
Moving forward A- Five  point resolution was endorsed by all the representatives of the veteran groups  as follows:
The veteran appreciated the President and Commander-In-Chief of the Armed Forces President Muhammadu Buhari, Honourable Minister Of Defence and the Chief of Defence Staff for their concern in improving the welfare of retirees especially the harmonisation of the pensioners.
The meeting decried the result by some veteran bodies to the use of Social Media, threat to protest to channel their grievances instead of following the laid down procedures.
More importantly, It also resolved to finding creative ways of addressing the expressed concerns of the veterans with regards to the issues of Security Debarment Allowance (SDA) and other welfare issues to which the Chairman Military Pensions Board Maj Gen A.B Adamu, the Gen Secretary Nigerian  Legion, Group Captain Kayode Abe (Rtd) and the Spokesperson for the Coalition of the Concerned Veterans,  Abiodun Durowaye Albert's  confirmed in an interview with journalists
The Veterans agreed with the submission  of the Minister of Defence that the spirit of esprit-de-corps,  respect for seniors and Military discipline should be maintained by the Veterans  despite all grievances.
While Veteran bodies resolved  to synergize for amicable resolutions of issues of common interest, The Minister of Defence in his remarks encouraged all Veterans to continue to support the leadership of the  country as Government is genuinely interested in improving the welfare of all retired Military personnel who served the Nation meritoriously.
The three hours hitch-free meeting has finally laid to rest the threats by Veterans to embark on peaceful protest.
at August 10, 2020