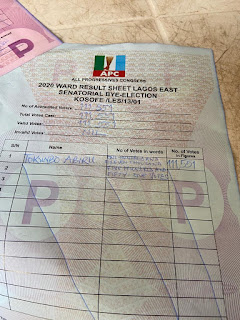 In one of the most peaceful and orderly party primary elections, the Lagos East Senatorial district, collated at Shomolu local government secretariat, witnessed a commendable turn out for the candidates of the senate and house of assembly to choose their preferred candidate to represent them at the red champber of the legislative and at the state assembly respectively.


According to the Chairman of the process Ibrahim Masari, who announced the results commended the members of the committes and voters for properly conducting themselves from the ward to senate level.

Below is the breakdown of the results

All votes was casted for Hon. Tokunbo Abiru.

Hon. Ibrahim Masari, announced that Abiru, having satisfied the numbers of required votes is the winner of the senatorial primary elections
at September 03, 2020