Fraud In the Osadebe House!!! 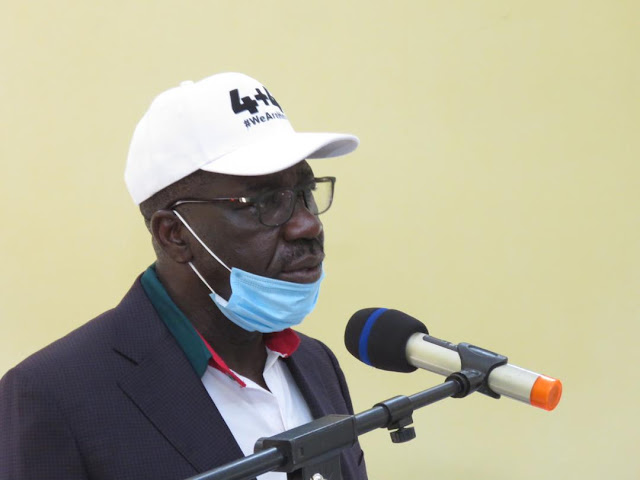 More than 72-hours after a foremost whistle-blower and anti-corruption crusader, Dr. George Uboh,
chairman of George Uboh Whistleblowers Network (GUWN), issued a 48-hour ultimatum to Governor Godwin Obaseki of Edo State to answer allegations of monumental fraud levelled against him, it has been pin-drop silence from the governor and his otherwise voluble aides.

Those who know Obaseki and how he operates know that if there was no scintilla of truism to the allegation, his camp would have responded with gusto.

Interestingly, when the same organisation alleged that the Vice President, Professor Yemi Osinbajo had interfered with a criminal investigation on August 10 and gave him seven days to respond, the VP responded the same day, attaching evidence to prove his innocence and asking the GUWN to let Nigerians know the outcome of their investigations.

“After analysing the VP’s response, we exonerated him and issued a statement and video in that regard. If the VP, the Number Two citizen in Nigeria, who is cloaked with immunity can humble himself to respond to us same day we wrote him, we, hereby, issue His Excellency, Godwin Obaseki, a 48-hour ultimatum to respond to our allegations.

“It should be noted that although we found suspicious transactions in multiple years, however, the suspicious transactions became rampant and egregious in 2019, hence, our conclusion that His Excellency, Godwin Obaseki allegedly siphoned funds in preparation for the election,” Uboh stated during a press conference at the GUWN office in Abuja, Monday, September 14.

Sickening as the allegations are, the poser is why has Obaseki failed to address them? What is he afraid of? Or, does he consider himself bigger than the people of Edo State on whose mandate he became governor and is seeking a second term in office?

According to Uboh, “The George Uboh Whistleblowers Network (GUWN) is in receipt of bank statements from 2015 to 2019 on the Edo State Government. We are not unmindful of the fact that there is (an) election around the corner in a few days in Edo State.

“As a Civil Society Organization, we are non-partisan. However, for the sake of public interest, we analyse any information sent to us from whistleblowers, some anonymous as in the present case. After analysing the information, we disseminate to the public whose interest we serve.”

Some of the allegations against Obaseki, according to the GUWN, include, “Numerous transfers made into 8-digit account numbers running into Billions of Naira; transfers in Billions of Naira from the Edo State Government to General-Purpose accounts in different banks, including but not limited to Equatorial Trust Bank (which is not in operation), Access Bank, Sterling Bank etc. Posers: what does general-purpose stand for? Are these funds dissipating from these general-purpose accounts in these banks? The red flag is clear and convincing.”

Further, he said, “We found Billions of Naira in transfers to Ministries, Departments and Agencies (MDAs) without being specific on the particular MDAs. Transfers should not be in bulk figures in Billions of Naira without specifying the MDAs and their respective account numbers.

“We found that Billions of Naira passed through Edo State Government to companies like A&K Construction without specifying the accounts of the companies. In other words, Edo State Government released money to itself, mentioned companies like A&K Construction without mentioning the recipients’ accounts. Without those details, we can conclude that the monies have no destinations.”

Uboh continued, “We found that Billions of Naira were transferred in numerous tranches without account numbers and account names of the purported recipients. We found Billions of Naira debited as Value Added Tax (VAT). This contravenes common sense. VAT should be a credit, not debit. Why would you move Billions out and give the narration as VAT?

“VAT collections are credits, not debits. Billions of Naira released as salary from EDSG without specificity. In August 2019 alone, N746,622,765:33 and N693,388,159:31 were moved under the narration salary from EDSG. This is very suspicious, particularly the proximity of the transactions and others above to the election.”

This allegation has, predictably, created a miasma of confusion in the state, because Saturday, September 19, is just around the corner. It is the day the people of Edo State will go to the polls to decide, who would get their mandate between the two leading candidates: Governor Obaseki of the Peoples Democratic Party (PDP) and Pastor Osagie Ize-Iyamu of the All Progressives Congress (APC).

As with such elections, opinions are still divided about who to pitch their tent with. Well, Obaseki has been governor since 2016 and is seeking re-election promising to Make Edo Great Again – the blueprint of his proposed second term, apparently copied from America’s President, Donald Trump.

Pastor Ize-Iyamu, on the other hand, has presented an elaborate ‘SIMPLE Agenda’ promising to correct the ills of the past and take Edo State to greater heights. Both leading candidates have been crisscrossing the length and breadth of the state selling their suitability and readiness to serve with all their might to the people.

However, if the people were wary of Obaseki’s candidature all the while considering his lacklustre performance in the last three and a half years, there is now a credible reason to vote him out based on his condescending refusal to answer questions regarding his (mis)handling of the state’s finances and how he perfected the heist using executive powers to muscle the legislature.

It would be recalled that for many weeks after the House of Assembly should have been inaugurated in 2019, Obaseki refused to initially order a proclamation, in line with constitutional provisions, to clear the way for the inauguration and constitution of the seventh assembly.

This reluctance was reportedly predicated on the governor’s belief that he did not have as many loyalists in the House in comparison with his predecessor and former national chairman of the APC, Comrade Adams Oshiomhole. Obaseki’s refusal caused further depletion in the number loyal to him and he vowed that the doors of the assembly would remain shut for as long as he desired.

Well-meaning indigenes and Nigerians all over the world and legal experts warned him that what he was doing was not only unconstitutional, it would have dire political consequences. But he was not swayed; Obaseki had made up his mind to deny the good people of Edo State legislative representation while perpetrating what has now been uncovered as a mindless plundering of the commonwealth of the state. When he eventually inaugurated the house, he exempted a majority of the duly elected lawmakers and enabled illegality to run riot.

Friday Itulah, a lawyer and former Speaker of the Edo State House of Assembly, said, “We are practising democracy, no doubt, and in our democratic practice, the three arms of government – legislature, executive and judiciary – and unless, and until these three are in place, we cannot claim to be practising democracy.

“And so, if a House of Assembly has come to an end by the effusion of time, ideally, it is the responsibility of the governor to send a proclamation to the clerk for the convening of the first sitting of the assembly during which officials are elected.”

All of that had no bearing with Obaseki. In retrospect, it does seem that his irrational refusal to convene the Assembly was because he knew that the legislators had wised up to his wanton financial malfeasances and decided to deal with them.

With the imposition of his lackeys on the Assembly, while forcefully securing the loyalty of others using financial enslavement and coercion, Obaseki went on a plundering binge that has now boomeranged. His only saving grace now – if not too late – would be to address the allegations.