Lagos East Senate: What you need to know about APC candidate, Tokunbo Abiru 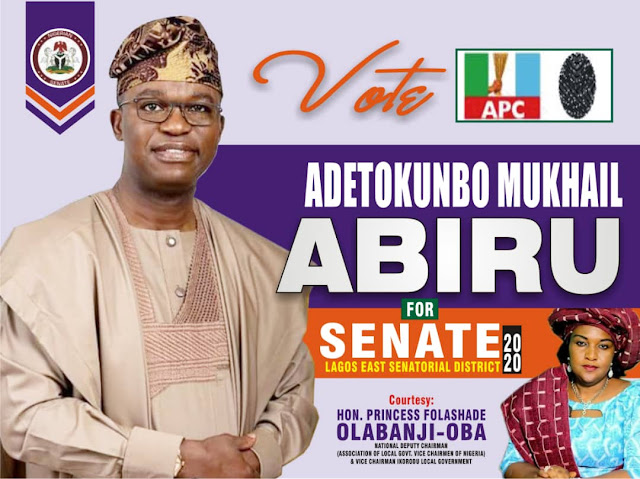 It is no longer news that seasoned banker, Tokunbo Abiru is the APC Candidate for the Lagos East senatorial race. He recently emerged the choice of the party and from all indications, he is a strong candidate for the election which comes up in October 2020.

It is gathered that this great banker who has paid his dues in banking has the requisite experience for the job.

He has not only been a banker all his life, he has held public office as a Commissioner and he has been involved in politics for the past few years.

Tokunbo Abiru is an accomplished economist, chartered accountant and foremost banker, he rose to the top of his career as a finance professional and banker and now seeks the mandate of the good people of Lagos East Senatorial District to serve as a Senator of the Federal Republic of Nigeria, under the platform of the All Progressives Congress (APC).

He has previously served with distinction in the government of Lagos State as the Honourable Commissioner for Finance between 2011 and 2013 before returning to First Bank of Nigeria plc as an Executive Director. He was appointed by the CBN as GMD of Skye Bank and led the spectacular rescue of Skye Bank and its transformation to the new Polaris Bank.

Tokunbo Abiru was born on March 25 1964. An indigene of Ikorodu, he attended Government College Lagos, Baptist Academy Lagos for advanced level studies and Lagos State University graduating in economics in 1988. He holds a B. Sc Economics and is a fellow of the Institute of Chartered Accountants of Nigeria (ICAN) and Honourary Fellow of the Chartered Institute of Bankers of Nigeria (CIBN). He is an alumnus of Harvard Business School and Lagos Business School executive education programmes and is happily married to Mrs Feyisola Abiru, CEO of H & Y Ltd, an industrialist with a thriving furniture industry in Ikorodu.

His working career took him through several institutions including Deloitte (formerly Akintola Williams and Co), Guaranty Trust Bank Plc, First Atlantic Trust Bank and First Bank of Nigeria Plc before his appointment as Lagos State Commissioner for Finance in 2011 under the administration of Governor Babatunde Raji Fashola SAN.

As Commissioner for Finance, he led the state’s floating of an N80billion bond earning it the EMEA Finance Best Local Currency Bond Award for 2012. His efforts led to a significant increase in Land Use Charge generated by the state government and the widening of the tax net in order to improve revenue generation by 2013. He returned to First Bank of Nigeria Plc in 2013 as Executive Director after a very successful two-year period in the Lagos State Cabinet.

He was appointed in July 2016 by the CBN as Group Managing Director to lead the turnaround of Skye Bank in a bid to preserve the stability of the Nigerian Financial System, a critical assignment which he successfully accomplished leading to the birth of the new and transformed Polaris Bank Ltd. He has successfully positioned Polaris Bank as a leading, profitable, digitally-enabled and systemically important Tier 2 bank in Nigeria.

Adetokunbo Abiru seeks to take his lifelong and career wide record of excellence into the Senate of the Federal Republic of Nigeria, the nation’s highest legislative body, deploying his competences in banking and finance, public financial management, corporate finance, economy, industry and commerce, accounting and technology to the development of Lagos  State and the Nigerian federation.

Adetokunbo Mukhail Abiru is an indigene of Ikorodu and is a quiet but acknowledged philanthropist who has contributed consistently and immensely to poverty alleviation, empowerment and community development in different parts of Lagos State.

Adetokunbo Abiru seeks the nomination of the All Progressives Congress (APC) to contest for the vacant seat of Senator representing Lagos East Senatorial District due to the sad and regrettable demise of Senator Adebayo Osinowo and promises to sustain the legacy of loyalty to the party and its leadership, contribution to the ideals of the party and generous devotion to the needs and aspirations of constituents that the great party is associated with.

If elected to the Nigeria Senate, Tokunbo Abiru promises to uphold the highest standards of representation, legislation, oversight, and collaboration with the executives of the party and his distinguished and Honourable colleagues in the National Assembly towards furthering the interest of the Lagos East Senatorial District, Lagos State and the nation in general

In the presidential system of government comprised of checks and balances, the legislature is a critical part of the tripartite system of executive, legislature and the judiciary.  In mature democracies such as the United States from which our presidential constitution was modelled,  the Senate is a distinguished chamber for relatively mature, accomplished  and sober “statesmen” who have deep patriotism, calm reasoning and a sober disposition.

Adetokunbo Abiru promises to live up to this high standard of patriotism, knowledge, generosity of spirit, loyalty and maturity that is expected to characterise a Senator of the Federal Republic of Nigeria
at September 15, 2020