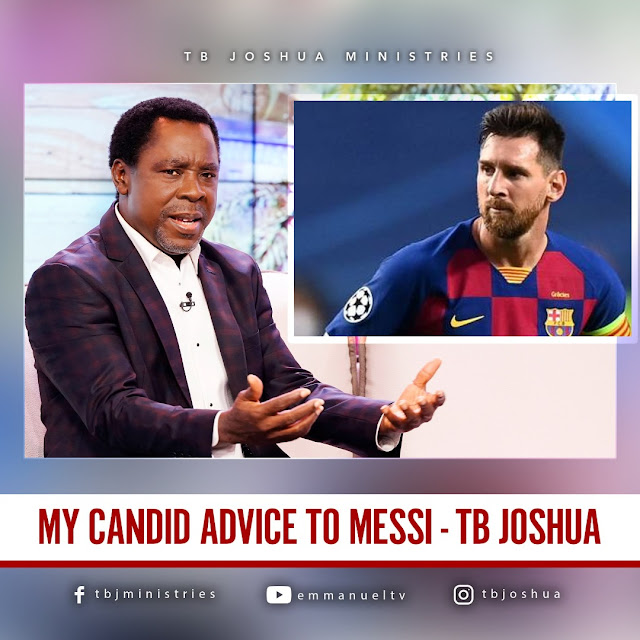 Two days after Nigerian Prophet TB Joshua’s “candid advice” to Barcelona superstar Lionel Messi to reconsider his move from Barcelona, the Argentinian has remarkably reversed his decision and agreed to stay at the Catalan club for an extra year.


Joshua had taken to social media on Wednesday 2nd September 2020 to advise Messi on the dangers of leaving Barcelona with bitterness.

When Joshua’s message was released, all indications still suggested Messi’s imminent exit with details of a huge deal lined up with Manchester City already being circulated online.

Before a meeting with Barcelona President Josep Maria Bartomeu, Messi’s father Jorge had unequivocally stated, “My son is not staying at Barcelona!”

However, the day after Joshua’s advice, Jorge curtly told Spanish media that his son was reconsidering his move and there was a possibility of him staying.

Messi, the most successful player in the club’s history and regarded by many as the world’s best footballer, submitted his intentions to leave the club after a lackluster season at Barcelona and an alleged fallout with the hierarchy.

Then on Friday 4th September 2020, Messi himself granted an exclusive interview to Goal.com where he admitted he had been planning to leave Barcelona throughout the year but decided to rescind his decision as he “didn’t want to fight against the club.”

"I'm now staying because the president told me that the only way I could leave was by paying the €700m release clause, which is impossible,” he explained.

When asked whether he planned on taking the club to court, Messi responded, "I'd never take Barca to trial because it's the club I love and that's given me everything since I joined.”

His announcement lays to rest an intense transfer saga which captured the attention of the world, considering the fact most people believed he would end his career at Barcelona.

He is now expected to join training sessions under new boss Ronald Koeman in preparation for the incoming season.
at September 04, 2020