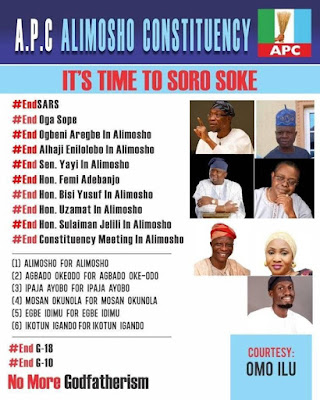 ... Why They must leave now

Speaking with newsmen,  one of the group leader Alhaji Mukaila Akanni, said we have lost total confidence on the so-called and self-acclaimed leaders, imagine the #EndSarsNow protest was going on peacefully before it was hijacked by hodllums and miscreants, None of these selfish leaders deem it right to ask how is the well being of our people, Enilolobo absconded to Magodo, thinking we will all die, but God has put him to shame as our God sent, peoples oriented leader Hon Idris Balogun Oluomo 1 of Isheri land, Alhaji Abiodun Isola Ejigbadero stood at the fore front with Hon. Kehinde Joseph to restore peace and sanity in our communities.

Akanni said "We are not afraid to say that we have lost confidence in Aregbesola and his men, we hereby call on him to move to Osun and built his own dynasty because in Alimosho here, the Aworis are saying No vacancy for him and his cohorts anymore.

Speaking, Ejigbadero described how the leaders will use him and dumb him after spending millions of naira to save the face of the party in Alimosho, he said he lost two of his followers during last election and not even a single leader came to the family of the boys to condole with them, all is empty promises. They did the same to us during Ambode, here is Sanwo-Olu again, who Is Fooling Who ? I for one and my team is tired of all the leaders and Otoge Alimosho is the way to go now.

Furthermore, he said with this development with #EndSARS Protest the national leader of our party Asiwaju Bola Ahmed Tinubu will know that all the so-called leaders misled him and that they don't have stronghold of the grassroots as they claimed to be.

Akani also decried the state of Alimosho today, as he stressed that beside Hon. Idris and Hon Kenny no leader who claimed Apex and minister have come or called on the situation on ground, we are placing vote of No confidence on Aregbesola Rauf to stay clear off the politics of Alimosho as we say OTOGE ALIMOSHO, we will be dictating to our own selves now, No Godfatherism again.

We also ask all sons of Awori land backing these insensitive leader to desist and join the train for a new dawn has come, Oluomo is our choice Mandate, 2023 is our birthright as we throw our weight behind and support him for the 2023 MHR, our pvc is intact to push them out.