The much anticipated Ondo state election took place yesterday Saturday, 10th Of October 2020 and it has seen the candidate of the All progressive Congress, Rotimi Akeredolu becoming victorious as announced by the Independent National Electoral Commission(INEC).Rotimi Akeredolu won the election, beating his two major opponents, Eyitayo Jegede of PDP and his deputy governor, Agboola Ajayi of ZLP.

One of the leading voices on Ondo election long before it took place is that of a leading prophet, Primate Elijah Ayodele, the leader of INRI Evangelical spiritual church.

Primate Ayodele made series of prophecies concerning Ondo state election, He started talking about it long before the party primaries in May.

On his prophecy for APC and PDP Primaries, He made it known that it is Only Akeredolu that can give victory to APC and for PDP, It is only Eyitayo Jegede that can challenge Akeredolu

If they really want to knock out Akerodolu, they should use Ifeoluwa.

If it is given to Wale Oke, APC will lose the election.

The only viable candidate PDP can produce is Eyitayo Jegede.

After the primaries, Primate Ayodele stated that He sees Rotimi Akeredolu becoming the winner of the election, this was the same time he prophesied victory for Godwin Obaseki In Edo polls.

‘Jegede has taken a wrong move and for this reason, he will lose the election to Akeredolu.”(Culled from the eagle online).

While making further utterances about the outcome of the election, three weeks before the election, Primate Ayodele explained that Rotimi Akeredolu will NOT emerge winner of the election excepts he manipulates. He noted that money, manipulations, security, technicality and power of incumbency will guarantee victory for him.

‘Rotimi Akeredolu will not win Ondo election except through manipulations and technicality, He must not underrate anybody, the candidate of the PDP, Eyitayo Jegede and ZLP, Agboola Ajayi are out to beat him. He needs to be careful because he will be betrayed, there are moles in his camp.

The people of Ondo state have rejected Akeredolu, no matter the crowd he has now, they won’t give him victory except he manipulate’’

Few day later, in an interview with the Sun newspaper, Primate Ayodele made a statement that other candidates should wait for their time because Rotimi Akeredolu will return as the winner of the election.

‘October 10 poll in Ondo will be a tight race, but the incumbent will win. I advise other contenders to pray for God’s appointed time.’ (Culled From Sun Newpaper)

As he has significantly and sequentially put the prophecies, they all came to pass starting from the Primaries.

Also for PDP, As Primate Ayodele had adviced, Eyitayo Jegede won after contesting with Agboola Ajayi who decamped from APC to PDP few weeks before the primaries.

On the first prophecy on the winner of the election, it is worthy of being noted that Primate Ayodele was right when he said Eyitayo Jegede will lose the election to Rotimi Akeredolu.

On the prophecy three weeks ago, During the election, election observers cried out as a result of vote buying in Ondo state election.

There was also violence recorded in some areas, in one of the polling units, someone was stabbed and there was gunshot to scare voters away from voting their choice of candidates.

On the fulfilment of the prophecy few days to the election, of course, it has just come to pass as INEC declared Rotimi Akeredolu as winner of the election. 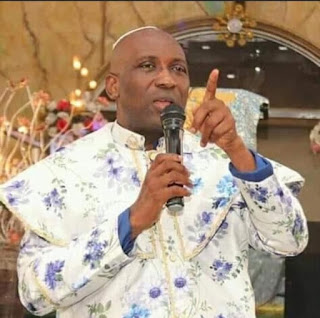