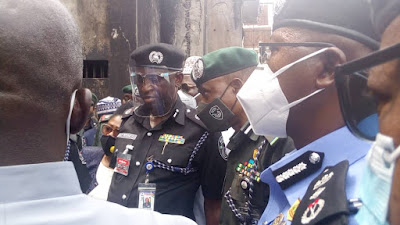 2. Tasks them to return to duty more dedicated, professional and discharge their duties with the fear of God

3. Reassures commitment to enthrone a more resourceful policing paradigm and enjoins residents to render morale support to the Police

4. As Enugu Governor passionately implores the police to return to duty while promising reprieve for the police and families of those slain 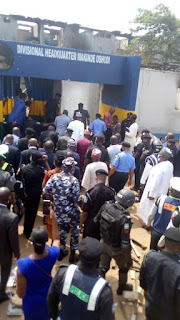 mni, directive that Police Officers be lectured, encouraged and sent back to their duty posts in the aftermath of the hijacked End SARS Protests, the Commissioner of Police, Enugu State Command, CP Ahmad AbdurRahman MCPSS, MCJ, MNIM on Wednesday 04/11/2020 at Senior Police Officers' Mess Enugu, lectured personnel of the Command, boosted their morales and encouraged them to return to their duty posts more committed, dedicated, diligent and professional in the discharge of their duties.

2. The Commissioner, while lamenting the unfortunate gruesome murder of two Policemen, burning down of two Police Stations, four Police Posts, operational vehicles and other equipment by miscreants who hijacked the hitherto peaceful End SARS Protests in the State, commended the personnel for remaining resolute and committed in containing the unprovoked attacks on the Police during the period.

3. He boosted the morale of the personnel by encouraging and giving them reasons to be in high-spirit and leave the unfortunate attacks on the Police in the past, as they return back to their duty posts.

4. Furthermore, while charging the personnel to be more dedicated, diligent, compassionate, professional and show utmost respect for the dignity and fundamental human rights of citizens, as they resume duties; the CP tasks them never to forget the fact that the job of policing human society is a noble and godly one that must be performed with integrity, fairness and the fear of God Almighty.

5. Meanwhile, the Executive Governor of the State, Rt. Hon. (Dr.) Ifeanyi Ugwuanyi, who visited venue of the lecture to commiserate and address personnel of the Command, passionately implored the Police to renew their commitments to the provision of security of lives and property in the State as was the case before the protests. He notes that going back to their duty posts will help avert the increased likelihood of crimes in the State.

6. He further promised to bring reprieve to families of the slain Policemen and restore the burnt Police Stations, operational vehicles and other equipment upon completion and receipt of the recommendations of his Government's Administrative Panel of Enquiry set up to look into and ascertain the extent of human and material losses incurred in the wake of the unfortunate unrest.

7. To this end, the CP has enjoined Religious, Traditional, Associations, Unions, Women and other Leaders as well as parents/guardians and Youths in the State to render necessary moral support to the Police in these trying periods. He entreats them to desist from saying or conducting themselves in ways capable of truncating the normalcy being restored while reassuring commitment to emplace a policing paradigm that will meet the needs of society in this age.