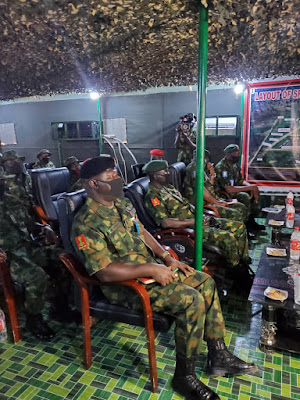 The Chief of Army Staff, Lieutenant General Yusuf Tukur Buratai has urged the Nigerian Army to remain in war mode in order to rid the North Western Zone of Banditry activities. 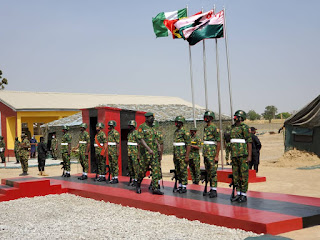 General Buratai who was on operational visit to Nigerian Army Special Super Camp 4 Faskari  in katsina state on Monday said, although the Army have performed creditably well, there was the need for them to put more efforts so as to completely wipe out banditry in the zone.

In order to ensure that the remnants of bandits are completely flush out of the north west Gen. Buratai extended operation sahel sanity which is supposed to end by December 2020 to March 2021.

He also said troops must cultivate the habit of intelligence gathering so as to gather credible information in order to continue to conduct successful operations to be able to deny the bandits freedom of action.

“You must remain in war mood, increase your intelligence gathering capabilities and redouble your operational activities particularly during the yulitide and new year  periods and beyond”.

He charged the troops the remain committed and continue the onslaught on the bandits until normalcy is restored.

He commended the troops for the timely rescue of students of Government Secondary school kankara and their prompt and bold response which resulted in the rescue of 84 Hizburamiyya Islamiyya students in Dandume Local area of katsina state recently.

He was briefed on the operational activities, successes and achievements of the troops on Operation Sahel Sanity and Operation Hadarin Daji in the North western part of nigeria especially in Zamfara, katsina, sokoto and kaduna states by the Brigade Commander 17 Brigade Brig Gen W Idris.

These included neutralization of 210 bandits, the arrest of 326 suspected bandits, 46 logistics suppliers and 11 rustled cattle Buyers.

Similarly, 619 kidnapped victims including the recently rescued 344 students of Government Science Secinfary School Kankara in conjunction with other security agencies were rescued.

Also during the period,  7,668 Cows and 1,842 Sheep were recovered and handed over to their owners.

General  Buratai extended the period of the Operation Sahel Sanity to March 2021 to enable the Army to completely wipe out banditry within the zone.

According to him, the operation was supposed to be terminated at the end of this month, but considering some insecurity challenges within the North Western Zone it would continue until March next year.