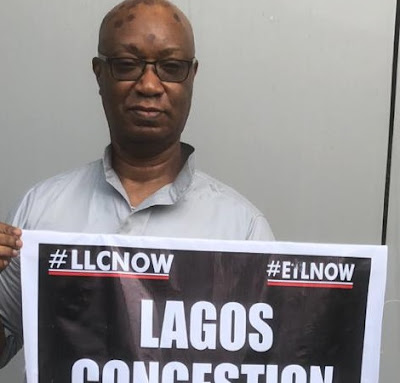 The real estate player, shared his frustrating experience on Lagos roads after spending about four hours on Third Mainland Bridge, against the regular seven minutes. He submitted some workable recommendations that can save Lagosians from needless traffic.

"It is no longer news that several business and contract opportunities has been lost as a result of the congestion and traffic on Lagos Roads, which has a negative impact on the business economy of the state and if this is not addressed it has the possibility of affecting the revenue of the state," he said.

Akinlade noted that ongoing road projects in different parts of Lagos by the state government may not necessarily reduce the gridlocks.

He called on  the state government to introduce congestion charges, as being operational in the United Kingdom of Great Britain and Wales.

He said: "This congestion charges will be applicable to motorists, and enforceable from Monday to Friday, this will thereby reduce the influx of road users who have little or nothing to do on the road. The motorists should be compelled to pay the sum of N1,000 per  trip which can be activated with car registration numbers with payment done via designated Bank in Nigeria. If N1,000 charge does not reduce the influx of road users, the state can increase to N5,000 /N10,000 or  as it deems fit."

According to him, with this measure, the traffic gridlocks would drastically reduce to the barest minimum.

Akinlade, however, vowed that unless the suggestion is acceded to, he would continue to protest, saying every time he was held up in traffic, it removes a day from his lifespan.

"It is high time we consider a different method in reducing Lagos gridlocks, which has now become a logo which Lagos State is known for," he said.